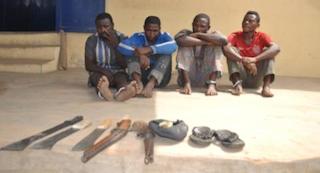 Brave residents of Ayobo in Ipaja area have arrested four robbery suspects who allegedly came in the night to rob the residents in Lagos State, western Nigeria.

The incident happened at Ashapa area of Ayobo in Ipaja.

The residents also recovered arms such as guns, cutlasses, knives, charms and other weapons from the robbers, P.M.NEWS learnt.

The suspects allegedly invaded the area with their arms to rob the residents at about 3.00 am on Sunday.

The residents resisted and pursued them into a bush in the area.

They mobilized other residents who surrounded the bush and combed it and eventually arrested four of the suspects, while one of them escaped.

They handed over the four suspects and the weapons they recovered from them to the police at Ipaja division who transferred the suspects to the Commissioner of Police at the Command’s Headquarters in Ikeja.

When our correspondent went to Ipaja police station where the robbers were initially detained, the police confirmed the arrest and told the reporter that the robbers had been transferred to the State Police Command Headquarters.

When our correspondent visited the Command Headquarters, the handcuffed robbers were seen where they were detained.

But the police refused to disclose the identities of the suspects and said they were still under investigation which could lead to the arrest of other suspects at large.

The Commissioner of Police, Mr Fatai Owoseni, who saw the suspects and some of the residents at the State Command commended the residents for their efforts in policing their community.

P.M.NEWS gathered that the residents of Ayobo and its environs had witnessed robbery attacks in the area especially in the night almost on daily basis.

They hardly sleep at night because of repeated attacks by robbers in the area. Many of them have been attacked and injured and their properties stolen.

Thus, they started looking for solutions which made them join hands with their local vigilante to secure their community.

P.M.NEWS gathered that they keep vigil to secure their area every night. It was such effort that led to the arrest of the suspects who are now in police custody.

Some of the residents who spoke to our correspondent confirmed that robbers have been terrorizing them and they had to mobilise themselves to ward off the robbery attacks..

He said it was while some groups were on guard at night that the suspects came and they raised the alarm which attracted other residents and it led to the arrest of the suspects.