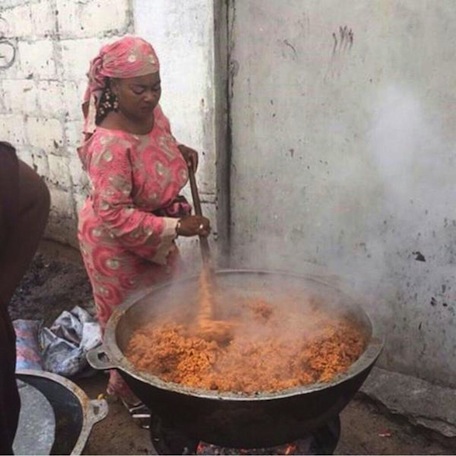 Lagos Governor, Akinwunmi Ambode has disclosed that the state consumes about N300 billion worth of rice annually, out of which the state produces little.

The governor, who received the Irish Ambassador Sean Hoy on Wednesday at the Lagos House, Alausa, Lagos, Soutwest Nigeria, hinted on plans by his government to boost food production.

“We cannot claim that we are self sufficient right now, but we have a plan to be able to let us feed ourselves at some point in time. It’s quite unfortunate right now that the state consumes almost like N300 billion worth of rice annually and what we have in terms of production is maybe like five percent.

“We are looking at a situation where we would expand the potentials of our farmers and cross into other states and be able to produce staple products for the people of Lagos. So if we have any partnership that can assist us in securing the future of our people in terms of agro-business, it would be highly welcomed,” he said.

He stated that his administration was looking to expand the agricultural sector and increase the production capacity of its farmers in the nearest future.

Ambode who also met with a team of investors from the United Arab Emirates, led by Professor Pat Utomi, restated the commitment of his administration to evolve policies and initiatives that would transform the city state into a destination for investors across the globe.

He said in less than 100 days of his administration, efforts had been made to create an atmosphere for investors to look towards the direction of the state and for existing businesses to thrive.

“We’ve already created an Office of Overseas Affairs and Investment to directly deal with issues that relate to investors coming into Lagos.

“We are committed to a situation where we would create a new city where Africans and especially Nigerians in diaspora can be proud of and then we also can be proud of,” he said.

The governor said that the state’s commercial strength with a population predominantly youths, made it unarguably the home of the future of investment in Nigeria.

He assured the investors of his administration’s support in the areas they intend to partner with the government.

“We are happy to be associated with you. I want to give you our government’s commitment today that we are committed to the project that is being done by Smart City Dubai and other investors. We are also committed to giving government support in areas that would make investments easy.

“I want to let you know Professor Pat Utomi is somebody that has had endless passion to make this kind of investment happen in Lagos state. He’s been a major promoter of investment in Lagos and one is so excited. I want to commend you for being part of this initiative,” he said.

Ambode also restated his commitment to the rule of law as well as judicial and security sector reforms, saying the efforts are geared towards ensuring that business transactions are done transparently.

“We would give credence to integrity of this government to make sure that whatever is being done will protect Lagos as well as investors. That’s what we are committed to. Wherever it is that we can be of help to accelerate the delivery of the project, we would do it.

“I have no doubt that wherever Professor Utomi is involved, it comes with a huge sense of integrity and that’s why we would ensure that every aspect of making sure that this project is expanded, because I understand that whatever it is that you have done, you need government commitment also,” he stated.

Speaking, Utomi said the group of investors from the UAE is aspiring to play a role that will significantly change the business climate in the state, revealing that they are looking to invest as much as $10 billion in the state within a period of time.

“Smart City Dubai has a track record of transforming a desert village in one generation to the world’s business hub. My hope and my expectation is that this initiative will make that happen for Lagos and be part of the inspiration along with other projects that you are driving, Eko Atlantic and a host of others, to make this a hub for the economic emancipation of the black man,” he said.