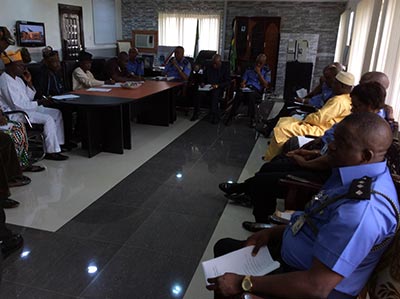 Ogun State Commissioner of Police, Abdulmajid Ali at a security meeting with the 20 local government council chairmen in the state on Tuesday.

In his quest to ensure that Ogun State remains crime free, the state Commissioner of Police, Abdulmajid Ali has charged all the 20 local government council chairmen in the state to support the police in combating crimes.

The Police boss advised them to complement the efforts of the state government and the police command and other security agencies in fighting crimes and other social vices in their respective local government areas.

Ali maintained that the command has been proactive in dealing with security challenges in the state, promising to sustain the war against criminals.

Ali spoke Tuesday at the State Police Command Headquarters, Eleweran, Abeokuta at a maiden security meeting between the police boss and the 20 Local Council Transition Committee Chairmen in the state.

The meeting summoned by Ali, centered on vital security issues in the state,which include ritual killings, kidnapping, police fight against land grabbers, cultists, use of unregistered vehicles or motorcycles and other crimes.

“I want to assure you all of adequate security of life and property and full support from all officers and men of the command.

“Let me also encourage you to be fully on ground and be more involved in community policing as the command is ready to be referring some community-based conflicts to you when it arises in parts of the state,” Ali hinted.

In his response, the Transition Chairman of Ijebu North Local Government, Mojeed Ekelojumati, who is the Chairman of the Chairmen, expressed appreciation to the police boss for his thoughtfulness and proactiveness for the first-of-its-kind security meeting with the chairmen, saying it would go a long way in promoting effective policing and peaceful co-existence of the people of the state.

All other Transition Committee Chairmen who spoke at the fora and reacted to some issues raised at the meeting, applauded Ali and the entire officers and men in the command for the new method of policing and smooth operations in Ogun State.

The 20 Transition Committee Chairmen assured the command of their full support in all ramifications to the new community policing method of the command.