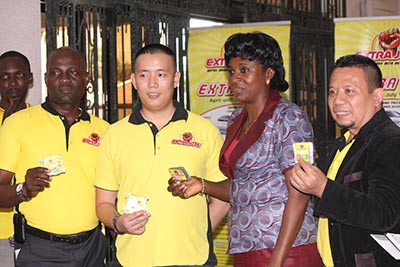 Since the entry of energy drink, Extra Joss, into Nigeria market, Nigerians have been treated to different kinds of refreshment and invigorating burst of energy.

Kalbe International, the marketer of Extra Joss, have remained true to their commitment of providing Nigerians with the best products for healthy living and they have raised the bar in sponsorship of grassroots sporting events nationwide.

The country manager of Kalbe International, Mr Didik Novandi, maintained that as part of their social responsibility, the company would continue to support the growth of youths and talent through the Extra Joss brand.
“Nigeria is a country blessed with lots of manpower and as a result, we have provided the perfect energy drink with no sugar but with essential nutrients to keep the mind mentally alert and the muscles working efficiency,” Novandi said.

He further explained that to reward the consumers who have been loyal to their brand through the years, Extra Joss is giving out a brand new car along with other fantastic prizes in the “Extra Joss Extra win promo.”

During the raffle draw ceremony and announcement of the winners in Lagos recently, Novandi expressed the company’s readiness to sustain its quality, adding that “there are few energy drinks in the market that give the extra edge associated with our products. Its formulation is perfect so also its flavour which is original.”

At the end of the draw many of the consumers drawn from Lagos, Sokoto and Kano were rewarded with prizes varying from Television sets, double door refrigerators and a brand new Hyundai Accent car.

The winner of Hyundai Accent car is Alhassan of Sokoto State with phone number: 08178533033.