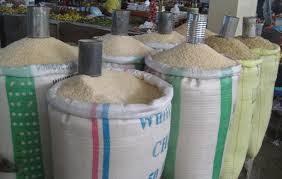 The prices of imported rice and maize on Friday slightly decreased at the Mile 12 market in Lagos State for the week ended, Aug. 28.

This is contained in the commodity index sheet made available by Novus Agro Nigeria Ltd to the News Agency of Nigeria (NAN) in Lagos.

While the price of a paint bucket measurement remained the same at N800 at the market.

However, the price of a paint bucket measurement remained the same.

Meanwhile, other agricultural commodities like Garri, Sorghum, Drum Beans and Soya Beans sold at the same price as last week.

A 100kg bag of soya beans is now selling at N15,000 at the same price as last week; the paint bucket measure also remained the same at N550.

A 60kg bag of white garri also remained the same as last week at N6,000, while the paint bucket measurement sold at N300.

While a 100kg bag of drum beans also did not change in price as it remained the same at N23,000, while a paint bucket measurement sold at N800.

Mrs Obiajuru Luya, Strategy Manager of the agro company, told NAN that the enforcement of some Federal Government policies on imported rice could be the reason for the reduction in prices.

“The reduction in the price of imported rice may not be unassociated with the recent ban on forex trading for rice importation.

“As well, the sealing of the warehouses of major rice importers by the Nigerian Customs Service could have impacted on the prices.

“This led to the influx of many other products at the time, so, the effects are probably manifesting in the prices of the products,’’ Luya said.

She added that the old stocks of maize were running out and most markets did not have the new stock yet.