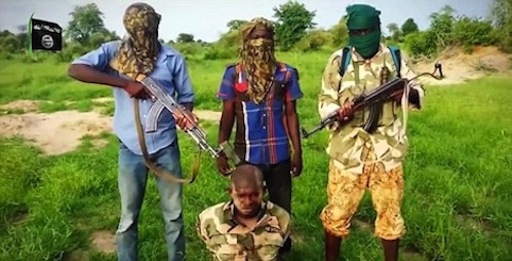 FILE PHOTO: A Nigerian soldier is made to kneel in front of three militants after he was captured by Boko Haram
PHOTO: MailOnline

There has been a sudden influx of Boko Haram agents into Lagos and other parts of Nigeria outside the militants’ main area in northeastern Nigeria, said Tony Opuiyo, spokesman of the Department of State Services. He said Boko Haram is trying to extend their reach after being pushed out of the urban centers of northeastern Nigeria in recent months.

Security agencies had arrested 14 Boko Haram suspects in Lagos, the capital Abuja and other parts of the country outside the northeast in the past two months, said Opuiyo. Those arrested include cell leaders, some of whom admitted to involvement in recent suicide attacks, he said.

Authorities on Friday said they arrested a teenager who was spying on Abuja’s international airport for Boko Haram.

Boko Haram’s six-year-old uprising has killed an estimated 20,000 people. At least 1,000 people have been killed by the militants’ violence since President Muhammadu Buhari was elected in March with a pledge to wipe out the extremists.

Chadian and Nigerian troops have driven the extremists out of some 25 towns held for months in what had been declared an Islamic caliphate. The insurgents, who in March pledged allegiance to the Islamic State, have gone back to hit-and-run tactics and suicide bombings largely in the country’s north.