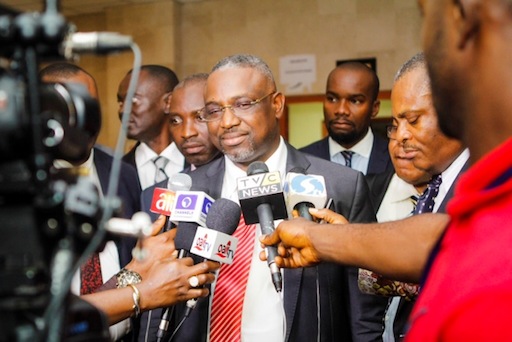 Counsel to Umanan Umana, Akwa Ibom governorship candidate of the All Progressives Congress, (APC), Victor Iyanam has accused the Independent National Electoral Commission and Governor Emmanuel Udom of Akwa Ibom of frustrating the case of his candidate before the tribunal, noting that, “the road to conclusion of their case was not an easy one”.

Umana approached the tribunal challenging the conduct of the April poll and declaration of Udom Emmanuel as governor of the state by the Independent National Electoral Commission (INEC).

Iyanam stated this in a statement issued shortly after the petitioners closed their case at the tribunal, noting that, the sitting commenced in Uyo, the state capital but that the tribunal had to relocate to Abuja due to what he called harassment of witnesses and supporters of the APC.

He said the action was to enable the tribunal carry out its duties without any form of interruption.

“We encountered a lot of problems during the proceeding, ranging from intimidation, harassment and deliberate attempts to delay proceedings by the defendants. When the tribunal commenced sitting in Uyo, supporters of the APC were attacked on a daily basis. In fact, some people died in the process.

“Secondly, when we sought permission of the tribunal to inspect materials used for the election, staff of the Independent National Electoral Commission (INEC) frustrated us. The tribunal gave us 14 days to inspect the materials but as at the 23th day, we were yet to commence work because INEC staff kept on giving us excuses on why the exercise could not take place. We then sought an extension to enable us conclude our work,” Iyanam said.

“We also requested that the materials be moved to Abuja. Even after the materials were moved here, Uyo INEC staff refused to hand over the materials on time, thereby causing another delay. Due to the development, we were only able to inspect materials from 15 out of the 31 local government areas of the state,” he said.

The Counsel who referred to a section of the election manual which states how election materials are supposed to be preserved, but lamented that the state of Akwa Ibom materials, adding, “They poured water on the materials so we had to dry and strengthen them before they could be examined. In some cases, voter cards that were thump printed were still in their booklets; then you begin to wonder how people could have voted when the papers were still in that state. There are a lot of questions begging for answers in this matter.”

Umana’s counsel however noted that virtually all their applications were granted by the tribunal.

The matter ended Friday with the demonstration of how forensic examination was carried out on the election materials used for the April 11 governorship poll.

The forensic experts had earlier told the tribunal that they found non- human and multiple finger prints on ballot papers used in the election.

The experts maintained that finger print matching technology has only 0-5 per cent failure rate, adding that. It is almost 100 per cent fool proof.

The tribunal also on the same day, admitted in evidence ballot papers which were used in the election.

On a whole, the petitioners called about 60 witnesses, just as all necessary materials including video recordings and death certificates of people who allegedly died during the poll due to wide- spread violence were tendered.

Similarly, Ita Awak, former commissioner of information in the state, maintained that “there was no election in the state and we are very positive that justice will be done in this matter. Akwa Ibom people were not allowed to select their leaders and that should not be so. Even in the presidential election, if not for the violence and rigging, President ‎Muhammadu Buhari would have gotten at least 60 per cent of our votes. Akwa Ibom people were cheated by people I refer to as enemies of the state.