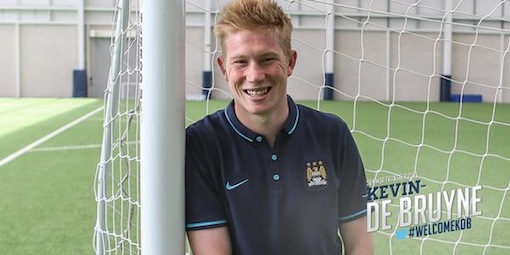 Manchester City have signed Belgium midfielder Kevin de Bruyne from German side Wolfsburg for a club-record fee believed to be around 58 million pounds.

The 24-year-old has agreed a six-year deal and is City’s fourth high-profile summer arrival after Raheem Sterling, Fabian Delph and Nicolas Otamendi.

He joined Wolfsburg in January 2014 for a reported £16.7m after making three Premier League appearances for Chelsea.

Chelsea signed the winger from Belgian side Genk for a fee in the region of £6.7m in January 2012.

Why did De Bruyne leave Chelsea?

De Bruyne was at Stamford Bridge for two years, during which he spent spells on loan at Genk (where he scored twice in 13 appearances) and Werder Bremen (10 goals in 33 games).

He started two of the first three league games of the 2013-14 season, but after that began only three more matches – all in the League Cup.

Manager Jose Mourinho walked out of a news conference after being irritated by questions about the midfielder, who had been left out of the squad to face Steaua Bucharest in the Champions League.

“He was not selected. It was my decision,” said Mourinho. “Only 11 can play and 18 can be selected. I try to decide, by what they do on the pitch, when they play and what they do in training.

Having made his international debut in 2010, De Bruyne became a Belgium regular during qualification for the 2014 World Cup and with the tournament in Brazil looming and the midfielder struggling to start games, national team manager Marc Wilmots urged him to leave the Blues in search of first-team football.

After his move to Wolfsburg, De Bruyne told Belgian newspaper Het Laatste Nieuws he had “lost his joy” at Chelsea and that he asked Mourinho to let him go.