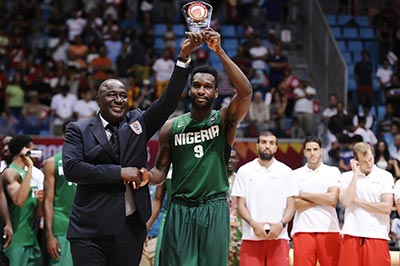 P.M.NEWS understands that a call from Vice President Yemi Osinbajo might have motivated Nigeria’s senior men basketball team, D’Tigers, to overrun their perennial foes, Angola, to win the 2015 African Basketball Championship, AfroBasket, on Sunday in Tunisia.

The Nigerian team, not only beat their arch rivals for the first time, but also won their maiden title in the continental championship. D’Tigers won the final 74-65 at the Tunisia 2015 in Rades.

Media Officer of Nigeria Basketball Federation, NBBF, Patrick Omorodion, posted on his facebook page after the epic match that the call made by Prof Osinbajo before the boys played the final was a timely tonic that propelled the Nigerians to victory.

“Thank you President Buhari for mandating the Vice President, Prof. Yemi Osinbajo to speak to our players before they entered the court to battle perennial foes, Angola. That did the magic as it fired the players to say Angola was beatable,” an elated Omorodion, who was with the team in Tunisia, wrote.

As the team prepare to return to Nigeria on Tuesday, Editor, Saturday Vanguard, Onochie Anibeze, who is also the Group Sports Editor of the newspaper, noted that Nigeria’s victory at the AfroBasket this time was symbolic.

According to him, “the first time Nigeria hit global limelight in football was in 1985 when we won the World Under 16 Cup that is now Under 17 World Cup. Buhari was Head of State. And now he is President, we are Africa’s basketball champions for the first time. Buhari must host them and extend the same goodies that Super Eagles enjoyed for winning the Nations Cup in South Africa. I’m proud of the
team. Congrats Nigeria.”

Meanwhile, the social media have also been awash with congratulatory messages for Nigeria winning the AfroBasket. DSTV writes on its

Facebook page: “Congrats to the Nigerian Senior Basketball team, D’Tigers, who became the AFROBASKET 2015 champions after beating defending champions Angola 74-65 in the AFROBASKET 2015 final that was played yesterday! This win qualifies the team for the 2016 Rio Olympics in Brazil! This is the first time Nigeria will be crowned champions at the FIBA AFROBASKET championship.”

While felicitating with the team, Segun Agbede wrote @SegunThePundit: “Congratulations D’Tigers for making history and making us so proud. Rio 2016 here we come!”

The Nigeria Super Eagles also congratulated the victorious team in their tweeters handle, saying “Congratulations to our national men’s senior basketball team, D’Tigers for winning the #2015AfroBasketchampionship in Tunisia in grand style.”

Angola went into the final looking to win a 12th African title and led early on, before Nigeria’s rotation made the difference as they turned the score around in the second quarter and once they took the lead, they held on to it, going up by as many as 19 points.

Chamberlain Oguchi hit a trifecta of three-pointers on his way to a game-high 19 points for Nigeria, with Olaseni Lawal finishing with a dozen. Carlos Morais led the Angolans with 15 points while Yanick Moreira added 13.

Oguchi was rewarded for his impressive tournament and huge individual performance in the final by receiving the Most Valuable Player award, presented by Tissot.