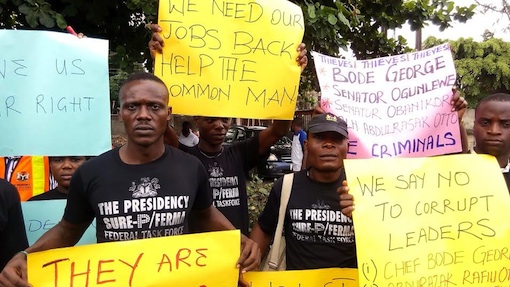 Kaduna Midwives and Community Health Extension Workers that were engaged under Subsidy Re-Investment and Empowerment Programme, SURE-P have embarked on a road protest over failure of the state and local governments in the state to pay their 35 months arrears of allowances.

The protesting SURE-P medical support staff claimed the state and local governments have not paid them since they were engaged in 2012.

Habiba Suleiman who led the protesters to the Kaduna State Nigerian Union of Journalists Secretariat on Monday, said when they were engaged , there was an agreement to pay N50,000 as monthly salary to each beneficiary .

She explained further that their engagement letter stated that Federal, state and local government are to pay them allowances , but expressed sadness that it is only the federal government that has been paying.

“It is unfortunate that since we were engaged, both the state and local governments have not given us anything. This is 35 months and the third year. We started working in September 2012 till now.”

Though she said the problem started with the previous government, she called on the state Governor Malam Nasir El-Rufai to as a matter of urgency intervene and get their allowances paid to them accordingly.

The protesters who carried placards with inscription such as “Save! Save!! Save!!! Maternal and Child Mortality and Morbidity,” “We demand for the payment of our arrears,” and “We demand that all our outstanding allowances should be paid,” among others, also urged El-Rufai to ask the local government to pay them.

It was also gathered that the women were at the government house earlier where they alleged that the Permanent Secretary, Ministry of Health who received them, said they were still processing the allowances.

According to Habiba, they sensed a foul play with the way their issue was being handled by the ministry.

“We were surprised when the ministry only agreed to pay us from 2014-2015 while we have been working since 2012. So what happened to our two years arrears?” she queried.