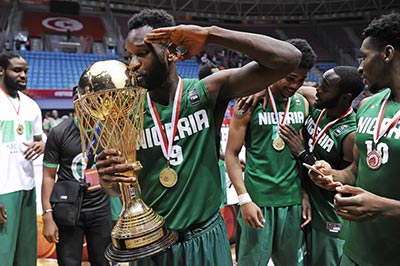 Oguchi and teammates celebrate with the Afrobasket trophy won by D'Tigers won on Sunday in Rades, Tunisia Sunday

Nigeria beat Angola 74-65 in the final of AfroBasket 2015 in Rades, Tunisia on Sunday to claim their first-ever continental
championship.

The company praised the senior men team’s doggedness and commitment right from the first match of the competition to the
last game where they confronted their perennial foes, Angola, a battle which was deservedly won by the Nigerian team.

Assistant General Manager of Winners Golden Bet, Mr. Adedeji Beecroft, said the sports betting company is so excited with
the Nigerian spirit displayed by D’Tigers to break the jinx at the continental championship on Sunday in Rades, Tunisia.

“We want to congratulate the new African champions and their technical crew on the feat recorded at this year’s AfroBasket,
and indeed we want to extend our congratulations to the Nigeria Basketball Federation for preparing this team to achieve this victory.

“Coming out as the champions at AfroBasket and equally securing a ticket to feature at next year’s Olympic
Games in Rio, Brazil are double victories for Nigeria,” Beecroft said.

Winners Golden Bet is a supporter of sports in Nigeria with the sponsorship of the annual Lagos FA Cup and the
Lagos SWAN Sports Week.