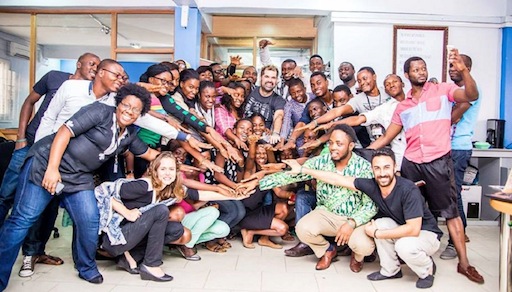 Launch of Andela in Kenya

Reuters – A year ago, computer science graduate Tolulope Komolafe was among the millions of young Nigerians unable to find full-time work.

Her only income came from tutoring teenagers in maths and science, for which she earned around 5,000 naira ($25) a month.

Fortunately, she was able to live with her brother in their Lagos home and avoid having to survive on her meagre income.

Komolafe, 25, now works for Andela, a Lagos-based company that trains computer programmers and developers for four months before outsourcing them to work remotely on projects in other countries in a four-year programme.

Andela is part of a new wave of firms that ease access to the labour market for young Nigerians. The firms are small but their role could be crucial. Nigeria has 170 million inhabitants and is the world’s fastest-growing country.

“I was scared. I thought I wasn’t going to be able to get a job because I thought that only happened to people whose parents knew someone influential,” said Komolafe of her two years of graduate unemployment before joining the programme last August.

It’s a well founded concern. The National Bureau of Statistics said 28 percent of Nigerians aged between 25 and 34 were jobless in the second quarter of this year, rising to 49 percent for 15 to 24-year-olds.

President Muhammadu Buhari says he wants to diversify away from reliance on oil, which creates few local jobs, towards agriculture and entrepreneurship.

An International Monetary Fund report said sub-Saharan Africa needs to create jobs at an unprecedented rate to absorb a growing labour force. Experts fear mass underemployment could cause social problems and increase the risk that young people will turn to radical groups.

Nigerians are particularly at risk. In July, the United Nations said that by 2050, Nigeria, the world’s seventh most populous country, would overtake the United States to become the third biggest.

“Half of my friends are unemployed. It’s a huge problem …. People are desperate,” Komolafe said.

Like others on the Andela programme, she was shortlisted after replying to an advert and first completed a two-week training “bootcamp”. Andela charges its Western clients a fee in exchange for labour in a region where wages are relatively low.

The company’s selection system means it will not dent Nigeria’s unemployment anytime soon. Only about 70 people have been selected from more than 12,000 applicants since it began last year.

But co-founder Jeremy Johnson, who teamed up with Nigerian entrepreneur Iyinoluwa Aboyeji, said Andela-trained programmers will eventually set up their own firms and create employment. He aims to train 100,000 developers in the next decade.

“We’re helping to equip people with the skills necessary to succeed in the digital economy,” said Ebun Omoni, who helps to oversee training.

The streets outside Andela’s offices are a reminder of Nigeria’s challenges. Youths dart through traffic to sell everything from plantain chips to bootleg DVDs in an attempt to keep up with the rising cost of living.

In March, Jobberman rolled out a web portal with Microsoft to help visitors identify jobs, prepare applications and improve interview techniques. Accessing the portal, however, requires paying for internet time, something not all can afford.

The need for workplace skills is the driving force behind West Africa Vocational Education (WAVE), a company that is a hybrid between a careers service and an employment agency.

WAVE trains young adults in time-keeping, conflict resolution, management and team communication through lessons and role-playing before a two-week placement with businesses it uses as partners. In some cases this leads to a job.

“We can’t kid ourselves and focus on Africa rising for a few,” said WAVE CEO and co-founder Misan Rewane, who described youth unemployment as a time bomb.

The non-profit entity charges participants 10,000 naira ($50) upfront, although some receive a loan to defer the fee until they have been paid. It takes a third of the trainee’s first month’s pay, and the same sum from the employer.

However, like Andela, a limited few may acquire skills but it is not a process that will lead to mass employment. Some 200 people have been trained in two years and the average starting salary for those who find jobs is 37,000 naira ($188) per month.

“A lot of these young people have come out of school systems that have short-changed them,” said Rewane, expressing her fear that a lack of broad skills could hold back future generations of Nigerian job seekers.