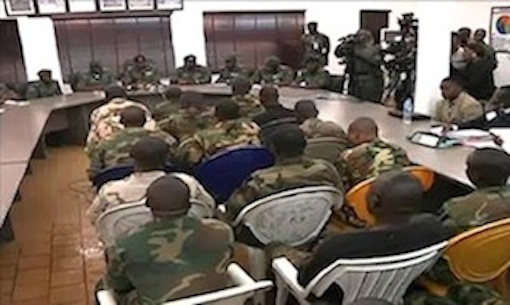 FILE PHOTO: Nigerian soldiers accused of mutiny during a court martial session in 2015

The Nigerian Army has confirmed the reinstatement of 3,032 out of 5000 dismissed soldiers whose cases were reviewed by a committee constituted by the Chief of Army Staff, Lt.-Gen. Tukur Buratai. The army noted that the soldiers were reinstated on merit.

The acting Director of Army Public Relations, Col. Sani Usman, according to a NAN report, made this known at a news conference in Abuja today.

Usman, however, said the cases presented to the disciplinary review committee were treated on merit, adding that the review process was still on. According to Usman, only soldiers with disciplinary cases have been reinstated as those with criminal cases are not even considered by the committee.

“You would recall that the Nigerian Army recently instituted a committee to review the recent disciplinary cases in the service, especially of those soldiers in the defunct ‘Operation Zaman Lafiya.’The committee has concluded its initial sitting and has made certain recommendation that led to the reinstatement of 3, 0 32 soldiers out of 5,000 cases reviewed so far.

“The cases reviewed were only disciplinary as no criminal cases were considered, the review is ongoing but the bulk of the work has been done for the time being,” he noted.

“The reinstated soldiers have shown their total readiness to be re-launched into theatre to combat insurgency and have commenced a re-training at the Nigerian Army Training Centre, Kontagora, Niger. This training is to re-orientate the affected soldiers and prepare them for the closing stage of the operational aspect of the counter-insurgency operations with more weapons and new leadership.
It must, however, be made clear that not all dismissed soldiers were granted pardon and recalled, those with criminal cases, had their sentences upheld,” he said.

Usman expressed the commitment of the present administration towards encouraging officers and soldiers, especially those in the frontline to give their best in their service to the nation. He said government would reward the gallantry of officers and soldiers involved in the ongoing operations in the Northeast and other operations in which the army was involved in. The spokesman, as NAN, assured the public that the new army command was committed to improving its relations with them. According to him, all misunderstandings between some misguided soldiers and the public are being addressed.

The Nigerian Army under its former Chief, Lt.-Gen. Kenneth Minimah, tried and punished soldiers involved in the ongoing counter-insurgency operations for indiscipline.