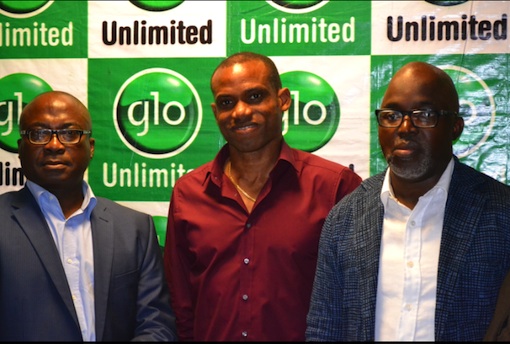 L-R: Ike Oraekwuotu, Sunday Oliseh and Amaju Pinnick during a visit to Globacom

As the Super Eagles prepare to face Taifa Stars of Tanzania this weekend in Dares Salaam, the team have been advised to embrace the new dawn inspired by the team’s new technical crew and show the stuff they are made of in the encounter.

Globacom said this in Lagos on Thursday that the Super Eagles must ensure a victorious outing in their 2017 African Cup of Nations (AFCON) qualifying match.

“It’s a crucial encounter from where the Eagles must emerge victorious and take the commanding position in the group,” Globacom said.

The Eagles defeated Chad in the opening group game in June in Kaduna by 2-0 while another top contenders in Group G, Egypt walloped Tanzania 3-0 in Cairo to lead the group on goals advantage.

“We believe that the stiff competition for shirts among the Eagles introduced by Coach Sunday Oliseh would help to raise a daring squad that would make Nigeria’s qualification for the Gabon 2017 finals a possibility,” Glo added, stressing, “the Match is a must-win for Nigeria.”

Globacom further enjoined the Glo Premier League players in the Eagles’ squad to maximize the opportunity of the selection to live up to the mark they have made on the domestic league by demonstrating that their selection was not a fluke.

“We strongly believe that the players in the Glo Premier League will not disappoint Nigeria, especially with the successes they have recorded in the camp since preparation began for this match,” the statement further stated, while urging the Nigeria Football Federation (NFF) not to waver in its robust support for the team.

“At a time like this, all hands must be on deck to enable the Eagles beat Taifa Stars in their home,” the statement concluded.