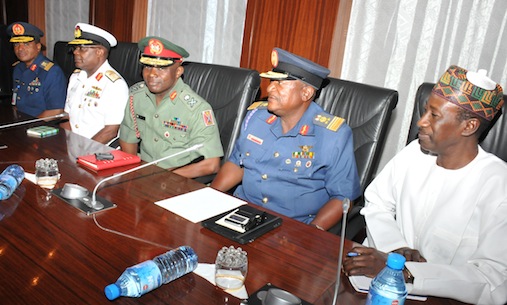 Some Nigerians living in the North Eastern part of the country grappled by security challenges, have expressed satisfaction with the approach of the new Service Chiefs in tackling the menace of Boko haram insurgents in the area.

A cross section of them who spoke to NAN in Gombe, Bauchi, Maiduguri and Damaturu, said that unlike in the past, they were now convinced that government was poised to living up to its responsibility of ensuring the safety of lives and property.

They observed that the new Service Chiefs were not only pro-active, but sincere and committed to the discharge of their duties, thereby removing doubts that had been in the minds of Nigerians regarding the possibility of elimination of the insurgents.

“A lot of achievements have been recorded and we pray for a lasting peace in the country. To a large extent, we can now sleep with our two eyes closed,” he said.

Malam Ibrahim Yusuf, Coordinator, Association for Responsible Citizens, a Gombe-based non-governmental organization, observed that the new Chief of Army Staff, Lt-Gen Tukur Buratai, had taken steps to boost the morale of soldiers, adding that his being an indigene of
Borno, the base of Boko Haram, made him to adopt workable strategies.

“The anti-insurgency or anti-terrorism war has been very effective, although it is still early to give a final judgment,” Mali-Gubio, also a former Borno Head of Service (HOS), said.

He added that the appointment of dedicated professionals as Service Chiefs had helped in boosting the anti-insurgency war.

“Judging from the caliber of persons Buhari had appointed to handle the anti-insurgency war, we have every hope that the war will soon be history.

“Those appointed are purely professionals in their character and straight forward in their dealings just like him (Buhari).

“Those of us living in Maiduguri know for sure that the war against insurgency has been very successful now and we are hoping that by the end of the year, the problem will be over,” he said.

Mali-Gubio advised villages in the hinterland, to be vigilant as the insurgents were trying to penetrate communities to avoid the military hunt.

Barr. Jubrin Gunda, a legal practitioner and former chairman of Nigeria Bar Association (NBA) Biu Local Government branch in Borno, also acknowledged that progress had been made in the war against terrorists.

“The anti- terrorism war has been very effective; we know that winning the war is not something that can be achieved overnight, but extreme progress has been made lately,” he said.

He also observed that the Buhari administration had, from inception, demonstrated seriousness in his approach to issues of security.

“It is not just about the appointment of the National Security Adviser (NSA) and the Service Chiefs; all members of the administration had shown dedication and capacity to fight the anti-insurgency war.

“The military is on top of the situation,” Gunda said.

Malam Abubakar Sufyan, a lecturer at the Federal Polytechnic, Bauchi, said that since the inception of the present administration, the frequency of attacks by the insurgents had reduced significantly.

He also noted that the morale of the soldiers had been boosted since the appointments of new Service Chiefs by Buhari.

“There is a significant improvement in the fight against insurgency as indicated in the reduction of attacks by the insurgents on soft targets.

“We have not heard of any single report that soldiers are dropping their guns and running away from the war front since the inception of Buhari’s administration,” he noted.

Mr Ahmed Chindaya, an indigene of Adamawa, one of the affected states and also Head of Centre, Federal Ministry of Information, Bauchi state office, said he was pleased that the level of attacks had dropped drastically.

According to him, with the appointment of the Service Chiefs, especially the Chief of Army Staff, Lt-Gen Burutai, fresh ideas were injected into the struggle.

Alhaji Amin Sidi, ex-service man in Bauchi, said there was progress in the fight against the insurgents.

According to him, there is now sincere commitment, dedication and patriotism by the security personnel.

He called on the government to increase the allowances of those in the war front, provide incentives for informants, and also sensitize the communities to cooperate with security personnel.

Alhaji Maimala Buni, National Secretary of All Progressives Congress (APC) and an indigene of Yobe, said the ‘leadership by example’ in the military, had boosted the morale of the military rank and file.

“There is a rebirth of patriotism and commitment in the military, under the new leadership, with the Chief of Army Staff Lt. Gen. Tukur Buratai, leading the ground operation, while the Chief of Air Staff, Sadiq Abubakar, leading the air operations to extinguish insurgency,” he said.

Mr Peter Okoye, a Damaturu resident who initially fled the state, said he came back to Yobe following improvement in the security situation.

“I am personally satisfied that we are heading to a permanent solution to insurgency in the country” he said.

Another resident who had also initially fled the town, Mr Ezekiel Shuaibu, said he was encouraged to come back to Damaturu when the new military command launched massive onslaught on Boko Haram formations in the North East.

“The situation is now different as the soldiers are on the offensive and taking the battle to the doorsteps of the insurgents, as against when they (soldiers) were on the defensive and repelling attacks.

“I am further encouraged by the peace recorded now, seeing Damaturu back to life, bubbling with socio-economic activities,” he said.
I t would be recalled that President Buhari had given the new Service Chiefs a marching order to end the activities of Boko Haram terrorists by December this year.

On Thursday, the Nigerian Army reiterated its stand on ending terrorism in three months as directed by the President.

Giving an update on its counter-insurgency operations through its Acting Director of Public Relations, Col. Sani Usman, the military said its offensive operations had decimated the central command and leadership base of the insurgents.

“I have no iota of doubt in my mind that our troops will wipe out the insurgents in the shortest possible time and we are committed to this target.

“It is gratifying to note that most of the terrorist group leadership, has been decimated, while foot soldiers are abandoning their masters, burying their weapons in the forest and seeking solace.

“It is the achievements from harmonized efforts that have confirmed our stand that the insurgency would be ended as soon as possible,” said Usman.