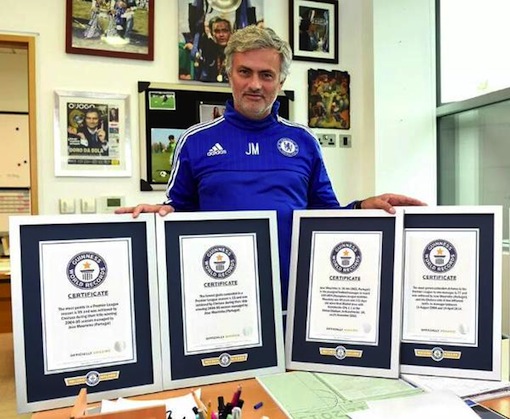 Following his bad start to the season, Jose Mourinho seems to have found some succour of some sort after he was bestowed with Guinness World Records certificates.

The 2016 edition of the world-renowned book includes a number of new sporting records, which means the likes of Frank Lampard and Jose Mourinho have something new to hang on their respective walls.

Lampard’s award is for the most Premier League teams scored against (39), while Mourinho was handed four certificates for achievements during his managerial career to date.

Speaking to the Guinness World Records website, Lampard said: “I set goals throughout my career to break records and this is one I never imagined to get.

“I am a big fan of the books and always read the books with my daughters before bed so to feature in it is amazing”.

“I’m now more focused on winning the next game than on what I’ve done in the last 10 or 15 years”.

Dan Carter, Joe Root, Novak Djokovic and Jordan Spieth were among other athletes to be handed certificates for sporting achievements.