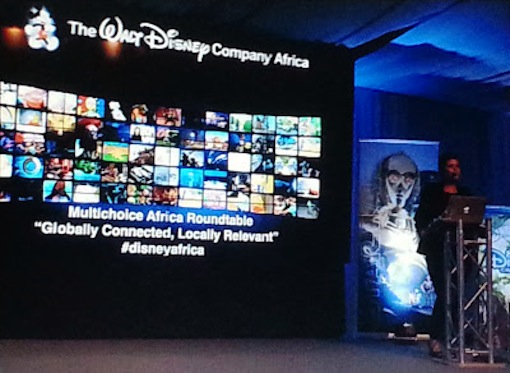 Disney Africa welcomed 90 journalists from across Africa to their first ever showcase to media from the continent, at this year’s Multichoice Africa Content Showcase Extravaganza.

On Thursday 3 September, guests received a Disney Movie ticket which gained them entry to the special outdoor screening, set under the stars on the lawns of the idyllic Outrigger Beach Resort in Mauritius.

After receiving their own Disney picnic basket and blankets, full of delicious treats and filling food, the guests made their way to the seating area, replete with comfortable chairs and loungers.

Once the Disney fans were settled, the vast outdoor screen lit up and the evening’s festivities were well under way.

A welcome speech by Deirdre King, Head of Marketing for The Walt Disney Company Africa, preceded the screening of two animated shorts. The first, the Academy Award-nominated Get a Horse, featured Disney favourites like Mickey, Minnie, Horace Horsecollar and Clarabelle Cow, in a laugh-a-minute romp across the countryside.

The second animated short, Disney Pixar’s Partly Cloudy, beautifully tells the tale of where delivery storks get their infant cargo.

A 10-minute intermission allowed guests to refill their drinks and popcorn and get comfortable. A firework display kept the audience enthralled as the feature film screening began. The audience warmly welcomed the global box office smash Marvel’s Avengers: Age of Ultron, the epic follow-up to the biggest Super Hero movie of all time.

The action-packed adventure kicks off when Tony Stark tries to jumpstart a dormant peacekeeping program and things go awry. What follow’s is Earth’s Mightiest Heroes, including Iron Man, Captain America, Thor, The Incredible Hulk, Black Widow and Hawkeye, being put to the ultimate test as the fate of the planet hangs in the balance. As the villainous Ultron emerges, it is up to The Avengers to stop him from enacting his terrible plans, and soon uneasy alliances and unexpected action pave the way for an epic and unique global adventure.

Disney showcased Marvel’s Avengers: Age of Ultron, as it perfectly showcased their theme for the Showcase – Globally Connected, Locally Relevant – as key sequences in the film were shot on the African continent in 2014. What is even more exciting is that sequences of the next Marvel super hero film Captain America 3: Civil War, will also be shot in Africa!

A star-studded film, under African skies, in a beautiful setting – what more could you ask for?