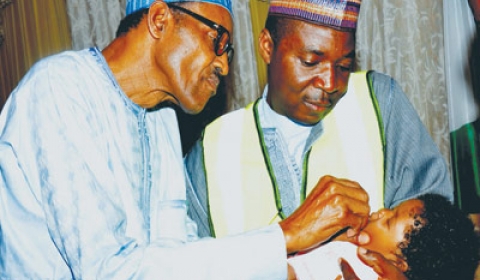 NAN reports that the event which took place at the residence of the president, was part of the campaign to wipe out the virus from the country by 2017.

NAN reports that the president who did not make any comment during the exercise, was assisted by Katsina State Gov. Aminu Masari and the Permanent Secretary, State Ministry of Health, Dr Ahmad Qabasiyyu.

Masari and the Emir of Daura, Alhaji Umar Farouq also administered the polio vaccines on some of the children.

In remarks, Masari said that the state had not recorded a single case of polio infection in the past three years.

He expressed his administration’s determination to intensify efforts towards eradicating the virus from the state by 2017.

The governor urged parents to continue to present their children for the routine polio immunisation in their respective areas.

He disclosed that only 37 polio cases were so far reported in Afghanistan and Pakistan this year.

Yuguda urged parents to continue to present their children for the immunisation in order to wipe out the virus completely from the country by 2017.

He reiterated the readiness of WHO to continue to support Nigeria to be polio free by 2017.