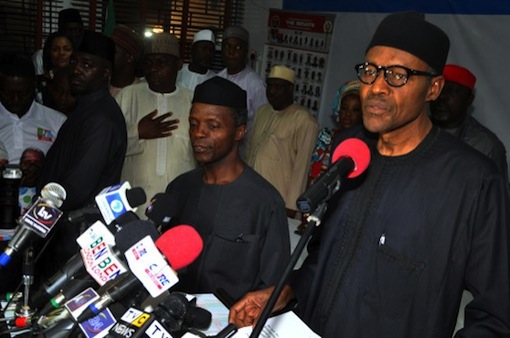 The Alumni Association of National Institute for Policy and Strategic Studies (AANI) said on Sunday that declaration of assets by President Muhammadu Buhari and Vice President Yemi Osinbajo has imposed a moral burden on all public office holders.

The Association therefore said now that the President and his deputy have cast the first biblical stone against secrecy about their assets, it’s time for other elected and appointed public officers such as governors, legislators to follow.

In a statement on Sunday, Comrade Issa Aremu, Secretary General of AANI said “Alumni Association of National Institute (AANI) commends this courageous move, the second of such since 2007 the late President Yar’Adua gave full disclosures of his net worth. This is in line with the motto of AANI which is ‘Towards A Better Society.’

“By the singular personal examples, both President Buhari and his Vice had made the war against graft inclusive in commendably putting the probity searchlight on all public holders including themselves.

“President Buhari and his deputy, Osinbajo have cast the first biblical stone against secrecy about their assets, it’s time for other elected and appointed public officers such as governors, legislators to follow.

“The president’s full disclosures had certainly imposed moral burden on all public office holders.
AANI said “In a country in which commonwealth has been serially pillaged; only those who make available for public interrogation the sources of their wealth will command genuine legitimacy to manage the affairs of Nigerians.

“Judging by their disclosures, both the president and his Vice has commendably lived on modesty as distinct from the wholesome greed of Nigerian public elite. Blessed are the public officers who disclose their assets, they will no more be suspected of being part of the robbery of common-wealth that has pushed as many as hundreds of million below poverty level.

“Only those who make public their assets can also be taken serious on the official rhetoric on the war against corruption,” said AANI.