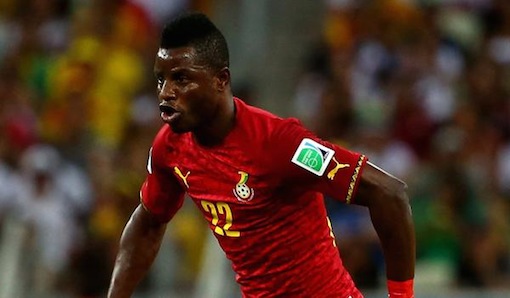 (Reuters) – Ghana and Senegal secured away wins in the African Nations Cup qualifiers on Saturday but it proved an embarrassing day for the continent’s other footballing heavyweights with Nigeria drawing and South Africa and Tunisia beaten.

There was an historic first-ever victory for South Sudan, who beat Equatorial Guinea 1-0 at home after failing to win in their first 11 internationals since becoming the world game’s newest nation four years ago.

A late free kick from Mubarak Wakaso handed Ghana a 1-0 win over Rwanda in Kigali and a second successive win in the preliminaries for the 2017 finals in Gabon.

Cheikhou Kouyate and Sadio Mane scored either side of halftime to give Senegal a 2-0 away victory in Namibia and maintain their 100 percent record in Group K.

South Africa suffered a major setback in Mauritania, ranked by FIFA some 40 places below them, as goalkeeper Itumeleng Khune dropped a free kick into his own net in the opening five minutes before the visitors’ debutant defender Siyabonga Zulu was sent off.

Despite being down to 10 men, South Africa equalised only to give away two late goals in a 3-1 defeat which marks the biggest scalp in Mauritania’s limited international history.

Tunisia lost 1-0 away in Liberia, who were celebrating a return home as they hosted their first full international since the end of the Ebola crisis. Francis Grandpa Doe, whose recall to the squad had been criticised, got the game’s only goal.

A further 12 games are scheduled for Sunday as teams continue the qualification process for the tournament in Gabon. The winners of the 13 groups plus the two best-placed runners-up qualify for the finals.