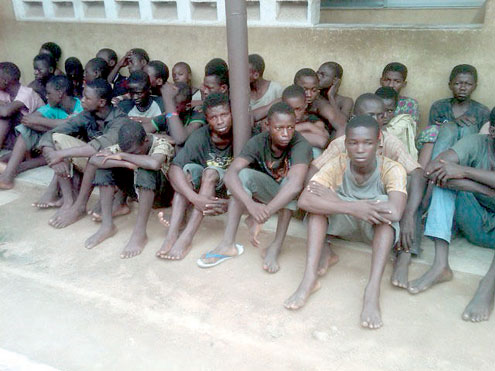 Officials of the National Agency for Food and Drug Administration and Control (NAFDAC) and mobile Policemen attached to its enforcement directorate have been attacked by traders and touts in Lagos and Ogun states.

This was contained in a statement signed by Mr Anslem Okonkwor, Public Relations Officer, Enforcement Operations of the agency, and made available to NAN on Sunday in Abuja.

It said that the attacked enforcement teams of the agency were on a nationwide raid for fake, unregistered, counterfeit and suspected contaminated vegetable oil in major markets and distribution channels in the states.

“When the traders and touts swooped on them, seized some of the products already evacuated by the teams and beat up one of the Agency’s staff identified as Miss Evelyn Chiemeke.

“The exercise which was almost successful turned rowdy when the members of the union at markets trooped out in their hundreds with the help of ‘area boys.

“Preventing the enforcement team from evacuating the offending “MOI Vegetable oil” and other products already seized from the markets.

“From Mile 12, to Ikorodu, Sango Otta, Alaba-arago in Ojo, Boundary market in Ajegunle, Suru Alaba and Oke-arin markets, there were attacks despite the presence of armed mobile policemen attached to the teams.

“The traders resorted to carrying all forms of weapons at the instigation of a market leader who admitted being the importer of the unregistered vegetable oil from Cotonou into Nigeria,” the statement said.

It said at Sango market in Ogun, where NAFDAC officials were also assaulted by the market union members, six shops were sealed and one of the staff of the Agency was roughly manhandled.

“At Alabarago Market in Ojo LGA where the team forced open a warehouse stock with fake products after the owners had absconded on the sight of NAFDAC’s officials.

“One of the Mobile Policemen attached to the team was attacked and almost lost his gun to the mob in the process.

“The Agency has regretted that the exercise was marred by pockets of violence.

“The Agency stormed the markets following intelligence reports over illegal importation and indiscriminate circulation of unregistered vegetable oil in the Nigerian markets,” the statement read in part.

It said the agency was also surprise on the shocking discovery of unhygienic warehouses right inside the markets.

The agency said that consuming such vegetable oil refilled in such a dirty environment would not only expose consumers to infections but could lead to untimely deaths.

“We have been going round other markets. This is Ajeromi market. We have seen smuggled oil and we have seen equally a place where they are refilling empty kegs of registered oil like Kings vegetable oil.

“They are refilling them with adulterated oil. We also have Emperor Vegetable Oil that is also being refilled. The owners have taken to their heels.

“We have sealed about 15 shops today including warehouses where they refill these adulterated vegetable oils. We will invite the owners through the market leaders for further investigations,” NAFDAC said.

The statement warned the public that by NAFDAC definition, any regulated product not registered is considered as fake because such products have not been tested or certified fit for human consumption by the Agency.

“Allowing it in public domain is 10 times risking the lives of poor Nigerians.

“The unhygienic environment where they operate and there is no way NAFDAC will approve any repackaging or refilling of any edible oil in this market,” the statement said.

It said that the exercise was a continuation of its nationwide regulatory exercise aimed at ensuring that Nigerians consume healthy oil as studies have linked consumption of adulterated vegetable oil to rise in heart related diseases.

On the seizures, the statement said a total of 1,040 kegs of MOI vegetable oil were found, thousands of products mutilated labels, six shops sealed at Alabarago market but evacuation hampered by members of the union and area boys.

“At the Mile 12 Market, a major distributor of fake vegetable oil was raided, traders trooped out and assisted by touts to cause commotion thereby preventing the team from raiding other shops.

“33×25 litres of the offending `MOI Vegetable oil’ were eventually evacuated to our office.

“Also 247 gallons were evacuated at Ikorodu market while 55 gallons were kept on hold after forcing the shop open due to the uncooperative posture of the traders,” the statement said.