Iceland makes history qualify for Euro 2016, Wales made to wait 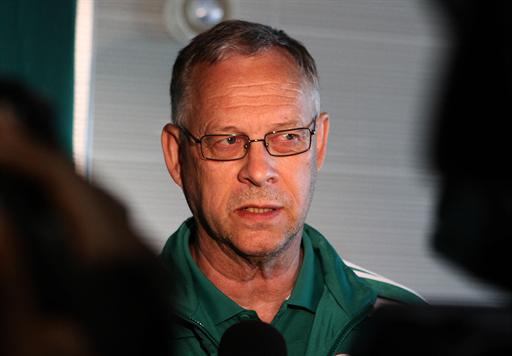 Iceland made footballing history as they qualified for a major tournament finals for the first time, joining the Czech Republic in securing their berth at UEFA EURO 2016.

The island nation, with its population of barely 330,000, became the least populated country ever to qualify for a European Championship thanks to a nervy 0-0 draw with Kazakhstan in Reykjavik. Iceland only needed a point to secure one of the top two places in Group A, and captain Aron Gunnarsson of Cardiff City was sent off in the 89th minute just before celebrations erupted on the final whistle.

The result allowed the side coached jointly by Heimir Hallgrimsson and the Swede Lars Lagerback to follow the Czechs and England in being able to book flights to France next year. England became the first nation to qualify for the 24-nation tournament on Saturday and the Czechs sealed their place by beating Latvia 2-1 while the struggling Netherlands slumped to a potentially disastrous 3-0 defeat in Turkey.

First-half goals from David Limbersky and Vladimir Darida put the Czechs in control in Riga, and they held on after Arturs Zjuzins got a goal back for Latvia. Meanwhile, the Dutch are in real danger of missing out on a European Championship finals for the first time since 1984 after suffering a second loss in as many games under new coach Danny Blind.

Semi-finalists at last year’s FIFA World Cup™, the Netherlands fell behind inside eight minutes in a packed stadium in Konya in central Turkey to an Oguzhan Ozyakup goal and Barcelona’s Arda Turan doubled the hosts’ lead before the half-hour mark. The Dutch were dishevelled and Burak Yilmaz sealed Turkey’s win late on, as Fatih Terim’s side leapfrogged their opponents into third place in the section, leaving them in pole position to steal a play-off place.

“We again shot ourselves in the foot,” Blind said, who lost 1-0 at home to Iceland on his debut last Thursday. “You make things incredibly hard when you let in easy goals.”

“Our fate is no longer in our own hands. I feel really terrible,” striker Robin van Persie told Dutch media after the Netherlands suffered their worst competitive defeat since Euro 1996.

Wales frustrated
Meanwhile, Wales will have to wait before clinching qualification for a first European Championship, and a first major tournament since the 1958 World Cup. They knew a win at home to Israel in Cardiff would guarantee progress from Group B, but had to settle for a 0-0 draw after failing to find a way past Ofir Marciano in the away goal.

Belgium’s 1-0 win over Cyprus later on Sunday, secured by Eden Hazard’s 86th-minute strike in toasty Nicosia, means Wales still require one point from their final two qualifiers next month, away to Bosnia and Herzegovina and at home to minnows Andorra.

“The atmosphere was great, but we have two games left,” manager Chris Coleman said. “It is in our hands so Israel and Belgium have to do their work to catch us.”

Belgium will also be through if they win in Andorra in their next match, so Israel are likely to have to fight it out with Bosnia for third place. Bosnia were comfortable 3-0 winners at home to Andorra, with Ermin Bicakcic, Edin Dzeko and Senad Lulic all scoring in the first half. Both sides were reduced to ten men after the restart as Everton’s Muhamed Besic was sent off for the hosts along with Andorra’s Victor Rodriguez.

Italy edged closer to qualifying from Group H after Daniele De Rossi’s sixth-minute penalty proved enough to beat Bulgaria 1-0 in the Sicilian city of Palermo. De Rossi and Bulgaria’s Ilian Mitsanski were both sent off in the second half, while Italy goalkeeper Gianluigi Buffon won his 150th cap.

The Euro 2012 runners-up are two points clear of Norway, who leapfrogged Croatia into second place thanks to a 2-0 win when the sides met in Oslo, Jo Inge Berget of Malmo scoring twice.

In the other game in Group H, Malta and Azerbaijan drew 2-2, with Rahid Amirguliyev scoring twice for the visitors either side of goals by captain Michael Mifsud and Alfred Effiong for Malta.