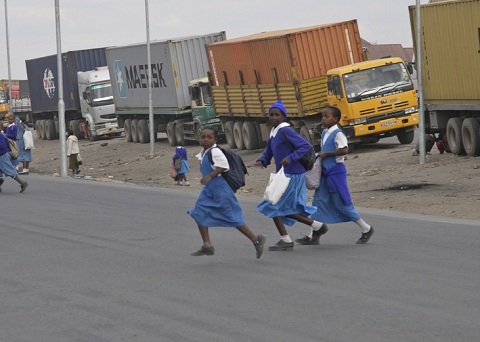 school children walk across a road : they need better protection

In the words of former United States of America President, Bill Clinton, during the celebration of International Literacy Day in 1994, “literacy is not a luxury; it is a right and a responsibility. If our world is to meet the challenges of the twenty-first century we must harness the energy and creativity of all our citizens.” Available data indicates that there are now close to four billion literate people in the world. In as much as this represents a positive stride, literacy for all is a yet to be accomplished objective. A recent UNESCO statistics shows that 774 million adults still cannot read or write – two-thirds of them (493 million) are women. Among youth, 123 million are illiterate of which 76 million are female.

In Nigeria, in-spite of efforts by all tiers of governments to address rising illiteracy level, there has not been a progressive increase in the literary level, especially among the adults. According to the National Bureau of Statistics, adult illiteracy rate in Nigeria stands at 56.9%. The implication of this is that about 70% of Nigerians are illiterates. Considering the fact that globally the illiteracy rate is approximately 20%, the Nigerian situation is rather disturbing. As expected, the states mostly affected by the Boko Haram insurgency in the northern part of the country recorded the lowest literacy level in the country.

The Country Comparison Index of Literacy Level by country in 2012 further testifies to the worrisome literacy situation in the country as it shows that Nigeria ranked 161 out of 184 countries with 66 per cent literacy rate. This implies that we belong to the mainstream of the world’s most illiterate countries. A recent USAID study also indicates that an estimated 10 million Nigerian children are not registered in school. A disclosure by a former Minister of State for Education, Chief Nyesom Wike, equally indicates that the number of adults who cannot read and write in the country is estimated at 60 million, which is about 38% of the country’s population estimated at 170 million. The revelation was made by Wike at the flagging off of the 2014 International Literacy Day.

At the 2013 edition of same event it was disclosed that adult illiteracy rate in the country has increased from 25 million in 1997 to 35 million in 2013. The declining fortune of literacy ratio among Nigerian children is, indeed, an embarrassment to the nation as we currently have over 10.5 million children out of school. The current Education for All, EFA, Global Monitoring report ranks Nigeria as one of the countries with the highest level of illiteracy. The EFA report on Nigeria affirmed that the number of illiterate adults has increased by 10 million over the past two decades, to reach 35 million.

The current literacy trend in Nigeria, if not speedily halted, could obstruct the attainment of the Millennium Development Goals (MDG’s). As it has been earlier asserted, literacy is vital to the achievement of every growth index. The way things stand, the objective of meeting the national mark of reducing illiteracy by 50% by 2015 seems largely unattainable. One of the most compelling way to tackle the myriad of challenges confronting us as a nation is to urgently attend to the declining literacy position in the country. To successfully confront poverty, disease, religious fanaticism, political chaos, ethnic bigotry, gender discrimination, economic depression among others, efforts must be made by all to enhance the literacy level in the country. Importantly, governments at all levels need to make pragmatic legislation as well as improve funding for the relevant agencies of government saddled with the execution of the mass literacy programme. Equally, literacy inclined groups and other related NGOs ought to step up activities and campaigns to increase awareness towards the importance of literacy. The various States Universal Basic Education Boards, SUBEB, need to intensify efforts to ensure that no child is left out in the mass literacy drive. To this end, all the states need to strictly adhere to the spirit and principle of the Child Rights Law which criminalizes denial of access of any child to school.

The general perceptive of literacy is ability to read and write. But literacy has bigger dimensions than mere ability to read and write. According to former United Nations Secretary General, Dr Kofi Anan, “Literacy is a bridge from misery to hope. It is a basic tool for daily life in modern society. It is a wall against poverty, and a building block of development. Literacy is a vehicle for the promotion of cultural and national identity.” The implication of this is that literacy is central to basic education for all, and crucial for dropping child mortality, achieving gender equality and ensuring sustainable development, peace and democracy in the society. For individuals, families, and societies alike, it is an instrument of empowerment to improve one’s health, one’s income, and one’s relationships.

Annually, September 8 is globally celebrated as International Literacy Day. It is a day set aside to draw attention to the importance and impact of literacy skills on individuals, communities, and societies. Since the day was first celebrated in 1966, on every 8 September, the United Nations Educational, Scientific and Cultural Organization, UNESCO, requests governments, employers, trade unions and other key global organizations to get involved and appreciate the importance of being able to read and write. In countries all over the world, the International Literacy Day raises people’s awareness of and concern for literacy issues within their own communities. Several activities relating to concerns over low literacy levels have taken place as a result of this increased awareness. Some of these activities include literacy day projects, particularly with regard to technology and literature, which are promoted by various organizations including reading associations.

Without a doubt, literacy opens up a window of opportunities to everyone, and is essential to individual and societal development. For a society to attain sustainable development, social development and environmental integration, literacy is one of the required key elements. The occasion of the 2015 International Literacy Day is, therefore, quite timely as it offers another golden chance for all stakeholders to reflect on the country’s literacy state and make appropriate concerted efforts that could ensure the realization of the national mass literacy project. The successful accomplishment of the mass literacy project could only be made possible with the participation of appropriate governmental and non-governmental organizations. This is in view of the wide scope and profound benefits of the project.

—Ogunbiyi is of the Features Unit, Ministry of Information & Strategy, Alausa, Ikeja.