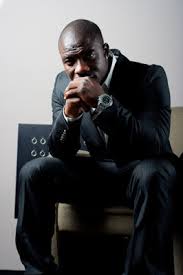 Adetunji Ayinde Marshal aka M.Marshal, the Canada-based Hip-hop singer and son of Fuji maestro, King Wasiu Ayinde Anifowose aka K1, is set to drop a new song titled ‘My Way’.

‘My Way’ is one of the hit songs off his upcoming debut album titled ‘Cornerstone’ scheduled to drop in 2016.

The young rapper, an English and Business Studies graduate from York University, Toronto, Canada, M.Marshal has been impressing music listeners and critics alike and also garnering fans from all over Nigeria and Africa.

“Without a doubt, the new album is beyond ready,” said M.Marshal, formerly known as Musty.

Late last year M.Marshal released ‘Loke’, a lovely track that turned out to be of good prospect on the air waves and had fans chanting ‘Loke loke’.

Soon he will be dropping videos of the two songs as he has just wrapped up the shooting of the videos.

The singer hooked up with ace director Unlimited LA to direct the videos and add quality technical touches he (LA) is known for in his past productions. Both videos were shot in Johannesburg, South Africa.

‘My Way’ video tells a story of a guy who has made it but with a flashback on when things were not so good. It was shot in the ghetto and rich neighbourhood to better tell the story, while ‘Loke’ is more of a rich and luxurious life, taking everyone to his present life at the moment.

“These two videos should mark the official arrival of M.Marshall to the Nigerian music industry,” the singer’s PR reps stated.

In May 2014, M.Marshal collaborated with his dad, K1 to remix “Baby Mi (Consolidation)”. The song was a banger and received rave review and constant rotation.

M.Marshal had opened the stage for artistes like Olu Maintain, Iyanya and Basketmouth when they toured Toronto, Canada.

The son of Fuji music legend also ended the year 2013 with a stunning performance at the first Lagos Countdown held at the Eko Atlantic City, Victoria Island, Lagos.

He overwhelmed the audience with his energy and performance, while waiting for rap star M.I. to grace the stage.

M.Marshall is one of K1’s five children toeing their dad’s line with interest in music.