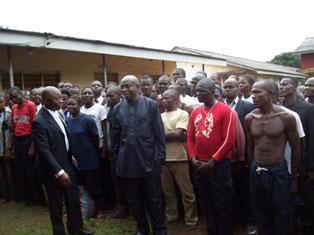 Following the crackdown on the Movement for the Actualization of Sovereign State of Biafra, MASSOB, by the Nigeria Police, members of the Igbo self-determination group have started going into hiding.

Several members of the group have been arrested in some parts of eastern states including Imo, Anambra, Delta, Abia and others.

In Delta State, more than 156 persons suspected to be members of MASSOB have been arrested by operatives of the Delta State Police Command in Asaba.

The Inspector General of Police, Mr Solomon Aresa, had given an order to arrest them for their alleged act of violence in Nigeria.

Some of the members who spoke to our correspondent in some states said it was better to fight from outside than to be in prison to fight for the actualisation of Biafra.

The Lagos zonal MASSOB leader, Achiolu Onyekwere who confirmed the development said it was unfortunate that the government has taken such hard stand to intimidate and arrest it members who have engaged in non violent struggle.

He said the arrest will not deter members from abandoning the struggle no matter the action of the present administration.

On why members were going into hiding, Onyekwere said it was not that the members were afraid but that they just decided to tread cautiously to avoid any confrontation until when the madness of arresting their members would stop.

The leader of MASSOB, Chief Ralph Uwazuruike was quizzed by the police recently after armed policemen of the Imo State Command stormed his Owerri private home and arrested 50 members of the group on guard duty.

Uwazuruike was not in the house when police raided his home, but later voluntarily turned himself in on the order of the Inspector General of Police, Mr Solomon Arase.

When Uwazuruike arrived SCID, Owerri Command, the Commissioner of Police in Imo State, Mr Taiwo Lakanu transferred him to Zone 9 headquarters in Umuahia in Abia State.

Uwazuruike was later released but the fate of the 50 members arrested was not yet known as they are reportedly still in police custody.