AAG: Glo rallies U-23 Eagles against Ghana, Falcons against Tanzania 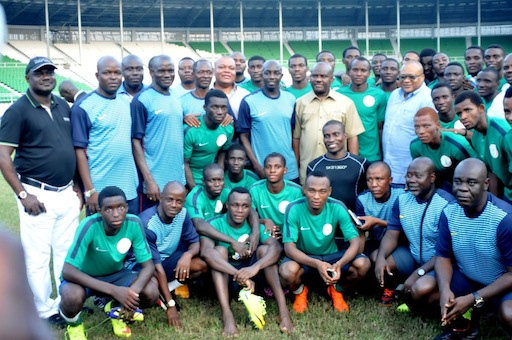 Official sponsor of Nigerian national football teams, Globacom, has urged the U-23 national team, ‘Dream Team’ and the Super Falcons to go for victory in their respective football engagements on Wednesday at the on-going All Africa Games (AAG) in Congo Brazzaville.

The two teams will mount double assault on Wednesday as they plot their way to reach the finals to pick gold medals.

The Super Falcons will face Tanzania in the second Group A match, while the Dream Team will lock horns with Ghana in the opening match of group B as the Nigerians look forward to victories from the two national teams.

Globacom called on both teams to go for outright victories to pave way for early qualification for the next round.

“The Dream Team coaching crew and players have prepared very hard for this competition and we expect them to do well while Super Falcons have the advantage of playing together for a long time,” the company said.

‎“In addition, the remarkable history of Nigeria in the competition should propel the team to win gold medals at the end of the tournament,” Globacom stated further.

The Super Falcons won football gold twice, in the 2003 and 2007 editions of All Africa Games. The men’s team, however, won the gold medal in 1973 when Nigeria hosted the competition.

‎‎“At this level, any team can outshine the other and we expect the coaching crew of Dream Team and the Super Falcons to be wary of the opposition,” Globacom said, while urging Nigerians to give the teams hundred percent support.

Globacom has also commended the Super Falcons for defeating hosts Congo in their first match in the competition.

The company urged the team who trashed the host, Diablesses Rouges of Congo 5-1 on Sunday in Congo, not to rest on their oars as they forge ahead in the tournament.