Buhari not a dictator, only helping Nigeria recover from paralysis - Tinubu 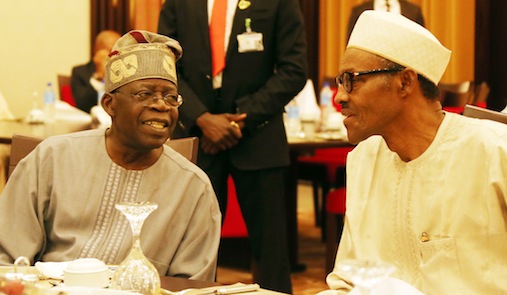 A chieftain of the All Progressives Congress (APC), Asiwaju Bola Tinubu, on Wednesday dismissed the insinuation by the Peoples Democratic Party (PDP) that the APC-led Federal Government was dictatorial in nature.

Tinubu, who was fielding questions from State House correspondents in Abuja after a closed-door meeting with President Muhammadu Buhari, said the president had been adhering strictly to rule of law.

According to him, president Buhari should rather be commended for stimulating the economy across the states of the federation.

“I disagree with that. He was elected on a platform of democracy and he has adhered to rule of law so far.

“What is dictatorship about what he has done? He has helped to stimulate the economy in the various states and that is where the people are.

“So, what is dictatorship? And the institutional paralysis had occurred in the country.

“It is very important for a steady man like the President to really help the nation recover from the paralysis and that is what he is doing. So, I don’t see what is dictatorial about that.

“If they don’t have anything to say, they rather be quiet. They created what is wrong here today and we cannot sweep that under the carpet. There must be rule of law.”

Tinubu also debunked the assertion that some APC chieftains including him, Chief Bisi Akande and former Vice-President Atiku Abubakar were engaged in political struggle over the party’s Board of Trustees’ position.

“Don’t listen to rumours, there is no struggle. Our party is not even looking at the direction of power struggle or anything of such.

“The support structure is to encourage and support the President as you have heard from Chief Bisi Akande, to help him institutionalise his goal, principle and vision for a new Nigeria,” he added

Tinubu, who was accompanied by the former national chairman of APC, Chief Bisi Akande, refuted the insinuation that he was in the Presidential Villa to discuss ministerial list to be announced by the president before the end of the month.

He noted that the Federal Government’s contribution to the Sovereign Wealth Fund (SWF) had been stalled due to falling crude oil prices in the international market.

“But there are other ways to support the fund which we have discussed with the President, but when the time is ripe that will be made known by the President’s spokesperson,” he added.