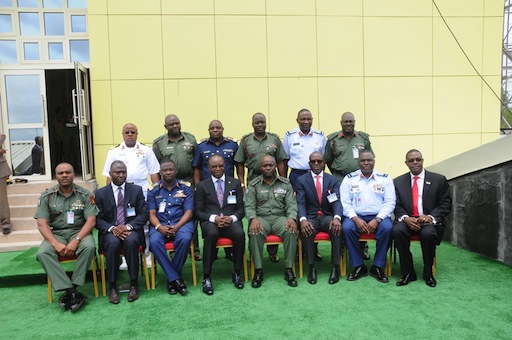 NNPC management with the military team

The Chief of Defence Staff (CDS) General Gabriel Olonisakin has assured the Group Managing Director (GMD) of the Nigeria National Petroleum Corporation (NNPC) Dr Emmanuel Kachikwu, that the Armed Forces would interface with the Corporation to ensure that all the problems militating against NNPC are given optimum attention.

The CDS gave this assurance when the GMD NNPC paid him a courtesy visit at his office at Defence Headquarters Abuja. Gen Olonisakin noted that already the Nigerian Navy has put up a lot of initiatives at ensuring that the issue of pipeline vandalism, piracy and oil theft are addressed.

He however asserted that military need some support in order to put a stop to oil bunkering and other forms of criminalities which cause Nigeria billions of Naira in revenue.

The CDS further said that it is the duty of the military to safeguard the strategic assets of the nation.

Earlier in his remark, Dr Emmanuel Kachikwu solicited for Nigerian Armed Forces collaboration in the fight against oil theft, pipeline vandalism and other vices in the Nigeria maritime environment.

He stated that his visit was predicated by the proposal of the NNPC to the President, Muhammadu Buhari, to partner with the Army Corps of Engineers for pipeline maintenance and the overseeing of the security of its properties.

The visit, he said was part of the efforts to work out modalities under the CDS’ supervision to have the military protecting NNPC’s equipment and assets. He pointed out that the NNPC is evolving a holistic attitude aimed at making sure that the best manpower is used.

“We are trying to equip the Navy a lot more with boats for patrols; we are trying to get trackers and central system to be able to monitor every vessel that comes in and out of the country. We have equally spoken with the Chief of Air Staff (CAS) on other effective way of collaboration”, he said.

Dr Kachikwu revealed that crude theft last year was in excess of 250,000 barrels on the average daily which is basically 1/5 of the entire national production.

He pointed out however, that the ugly trend has reduced since he came onboard as the new GMD NNPC, even though he was quick to admit that a lot more still required to be done to finally curb the menace.

Those in attendance at the meeting were the Principal Staff Officers and Directors of the Defence Headquarters. Colonel Rabe Abubakar Acting Director Defence Information