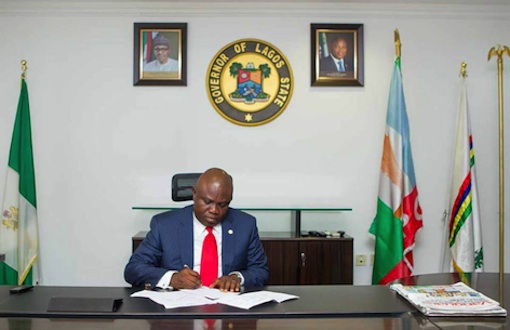 As at now, the governor has not yet appointed a new head for LAGBUS, the agency in charge of mass transit buses in Lagos.

Also sacked is Dominga, who headed the Lagos Safety Commission all through the tenure of Governor Babatunde Fashola, while Mr. Joe Igbokwe, General Manager, Lagos State Infrastructure Maintenance and Regulatory Authority (LASIMRA) has also been removed and given another portfolio.

On Thursday, Ambode appointed new heads for the Lagos State Safety Commission, LASIMRA and the Water Regulatory Board.

The governor approved the appointment of Mr. Fouad Alade Oki as the Director General of the Lagos State Safety Commission, the agency saddled with the responsibility of safety regulations and enforcement in the State.

In a statement signed by the Secretary to the State Government, Mr. Tunji Bello, the governor also approved the appointments of Chief Funso Oyekola Ologunde as the Chairman and Mr. Jide Odekunle as the new General Manager of LASIMRA.

Mr. Joe Igbokwe, who until now was the General Manager of LASIMRA, was also appointed by Governor Ambode as the Chairman of Wharf Landing Fee Collecting Authority.

He also appointed Arch. Ahmed Kabir Abdullahi as the Executive Secretary of the Water Regulatory Board.

The appointments, according to the statement take immediate effect.