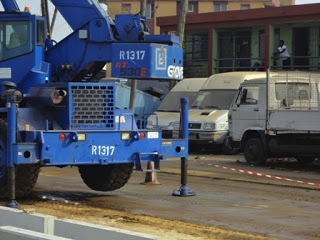 Julius Berger Nigeria Plc has returned to site on the Lagos-Ibadan Expressway ahead of its plan to start full repair works again by the end of September.

The rehabilitation works on the road were stopped by the company some time ago following some issues with the Federal Government.

A visit by a correspondent of New Agency of Nigeria (NAN) to the site on Thursday revealed that officials and other workers of the company were already on the road preparing for the work ahead.

Some officials of the company told NAN that the road rehabilitation would start from kilometre 12 otherwise known as the ”long bridge” and would run towards the Shagamu Interchange.

They said the skeletal work started on Aug. 8 at the Wawa Bus-stop along the expressway.

NAN reports that the company has already started moving heavy duty vehicles and road barriers from its yard at the Sagamu-Interchange to Wawa Bus-Stop at Kilometre 12.

The barriers were being taken to Wawa Bus-Stop where workers were already repairing the median along the expressway.

Julius Berger started the road rehabilitation from the Shagamu Interchange towards Lagos during the initial phase of the reconstruction exercise.

The rehabilitation of the entire Lagos-Ibadan expressway was awarded in 2013 at a total cost of N167 billion by former President Goodluck Jonathan.

The expressway is now being built to three lanes on both sides up to Sagamu Junction and two lanes up to Ibadan.

A fly-over and inter-change are being built at the Redemption Camp area to solve the perennial traffic grid lock on that section of the road.

NAN recalls that government terminated a concession agreement on the maintenance of the road with Messrs Bi-Courtney in 2009 because of alleged inability of the company to make progress after four years.

A former Minister of Works, Mr Mike Onolememen, had said in 2013 that the contract work consisted of reconstruction of Lagos-Ibadan Dual Carriageway from Shagamu-Ibadan.

Onolememen said that the road reconstruction would commence at the Shagamu Interchange in Ogun State and terminate at Ojoo Interchange in Ibadan, a total length of about 84 kilometres.