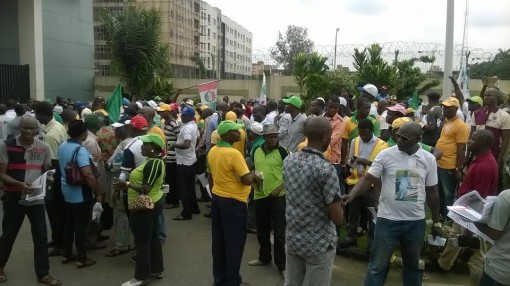 The All Progressives Congress (APC) has hailed Nigerian workers and the Civil Society for standing up firmly against corruption, calling their open demonstration of support for the Federal Government’s battle against corruption a major boost to the anti-graft fight.

In a statement issued in Abuja on Friday by its National Publicity Secretary, Alhaji Lai Mohammed, the party said Nigerian workers’ unambiguous stand against corruption is also a clear repudiation of all those who have attempted to politicize the battle either by insinuating selectivity or saying the government should face governance instead of dwelling on the fight against corruption.

”Thursday’s nationwide demonstrations by Nigerian workers and the Civil Society in support of the anti-corruption battle is the clearest indication yet that corruption is now seen for what it is, a vice to be condemned and punished rather than something to be venerated and celebrated. The growing intolerance for corruption among Nigerians is also a clear example of what a nation can achieve under a committed, sincere, purposeful and focused leadership,” it said.

APC said the delivery of good governance is seriously hampered by corruption, hence the cankerworm of corruption that has eaten deep into the fabric of the Nigerian society is the main reason why millions of unemployed youths cannot get jobs, why hospitals lack necessary equipment and medicines, why infrastructure deficit is worsening and why social services are almost non-existent, just to mention a few.

”A huge chunk of the billions of naira which are budgeted annually for all sectors of the economy end up in private pockets. Little wonder then that the economy has been in the doldrums over the years, despite the trillions of naira earned by the country from crude oil sales alone.

”It is therefore baffling that some people, for whatever reasons, have decided to engage in sophistry in their attempt to distract the government from combating graft. Thursday’s nationwide anti-graft rally by Nigerian workers and the Civil Society has shown that Nigerians are not buying such fallacy,” the party said.

It recalled the promised made by President Muhammadu Buhari in his inaugural speech on 29 May, 2015, that his administration would tackle head on the serious challenges facing the country, including insecurity and pervasive corruption, and appealed to all Nigerians to continue to give their unalloyed support to the administration in its determination to surmount the challenges.