Okagbare laments one event outing at All Africa Games 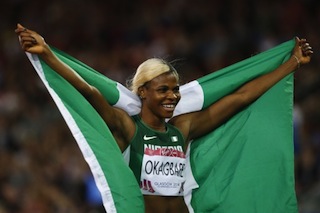 Africa’s fastest woman, Nigerian Blessing Okagbare, has described her decision to feature in only one event at the multi-sports All Africa Games currently going on in Congo Brazzaville, as a painful decision she was forced to make.

Okagbare, who is scheduled to arrive Congo Friday ahead of the athletic events of the All Africa Games which begin this weekend, disclosed that she has been advised to take part in only the relay race at the Games.

According to her, the hamstring injury she had been nursing since the last World Athletic Championship in Beijing, China, would not allow her to feature in her traditional events such as the 100m,200m and the long jump.

Okagbare, who went for surgery shortly before the All Nigeria Athletics Championships held in Warri, Delta State, was certified fit for the World Championships.

The injury probably re-occurred because of rounds she did in the pre-race warm up in Beijing.

“There is little I can do with the hamstring, that is why I had to settle for only relay race at this year’s All Africa Games as advised by my doctor. It is not always good competing in one event in this kind of competition, but I need to be in Congo because we will have a lot of athletes from Africa competing and this is an opportunity to see one another again in every other four years, just like the Olympics,” she said.

Okagbare appealed to Nigerians, especially her fans, that they should bear with her whenever she lets them down when expectation is high.

“It is not my fault when situation like this happens. My appeal is that Nigerians should understand the predicament I found myself, but I know that this is my country and I must at all times give my best for the nation,” Okagbare said.