Corruption cause of poverty, waste in Nigeria, says Buhari 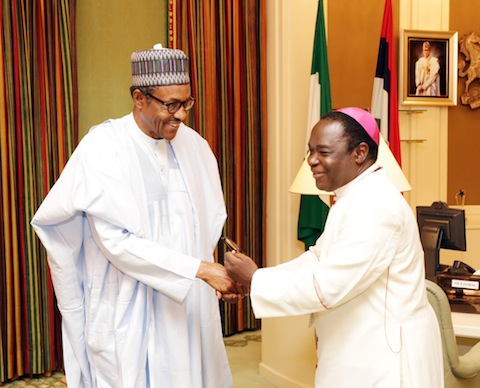 President Muhammadu Buhari of Nigeria has stated that apart from barefaced theft of public funds, corruption has also been cited as the main reason for poor policy choices, the prevalence of poverty in the midst of plenty and waste of resources in the country.

Buhari said this in his Goodwill message at the Conference of Catholic Bishops of Nigeria earlier today in Port Harcourt.

In a message delivered on his behalf by the Vice President, Prof. Yemi Osinbajo, SAN, the President declared that “corruption in our country is so endemic that it constitutes a parallel system. It is the primary reason for poor policy choices, waste and of course bare- faced theft of public resources.”

While further clarifying his administration’s commitment to the war against corruption, the President said “our fight against corruption is not just a moral battle for virtue and righteousness in our land, it is a fight for the soul and substance of our nation.”

Giving an insight into the way corruption destroys the nation, the President told the Second Plenary of the Conference that “it is the main reason why a potentially prosperous country struggles to feed itself and provide jobs for millions.”

On security, the President disclosed that “we are on course to militarily rout Boko Haram, and make them incapable of taking and holding any territory,” adding that, suicide bombings in some parts of the North East are the desperate acts of the terrorists to create a sense that they are still in play.

He assured that “with vigilance and good local intelligence we will make those cowardly acts practically impossible.”

Briefing the conference on the economy, the President disclosed that “we must change the paradigm of thinking about our economy and the ultimate good of the majority. While we create an enabling environment for free enterprise, we must reason, plan and budget with the understanding that almost 2/3 of our people are extremely poor, and must be helped first to survive and then to fully participate in the economy of the nation.”

Consequently, he continued, “we must create a safety nets for the very poor and vulnerable while ensuring that social spending is also a direct investment in the economy. We must invest substantially in relevant education, teacher training , and vocational and entrepreneurial training.”

The President who had attended the First Plenary of this year’s Conference in February as the presidential candidate of the APC, expressed a sense of honour at the invitation, and delivered to the Conference, “warm felicitations on behalf of the Government and people of our great nation Nigeria.”

The President praised the Bishops’ Conference that their “bold critical interventions at various crucial moments in our national journey have helped to caution, admonish and ultimately stabilize the polity. This is as it should be. This nation belongs to us all, leaders in every sector owe it to this generation to contribute in building a good society.”

He concluded by asking for daily prayers while promising that “for us elected into government we have since set about the daunting tasks before us, with vigour and commitment in the full assurance that by the grace of God our country will become safe, secure, prosperous and virtuous.”

In his speech, the President of the Conference, Most Revd Igantius Kaigama, the Archbishop of Jos commended the Buhari administration’s commitment to the fight against corruption and praised the formation of a Presidential Advisory Committee on Anti-Corruption.

According to him, “the president is dead right that if we don’t kill corruption, corruption will kill us.” He also prayed that God will give th citizens of Nigeria a new heart.