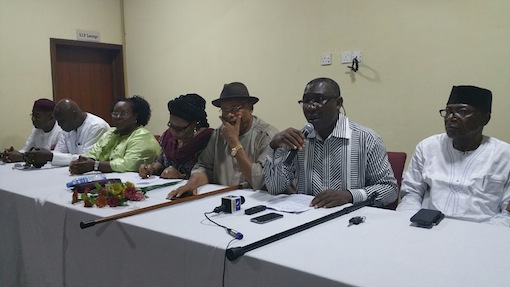 Political Elders, stakeholders and leaders of thoughts from Akwa State on Saturday declared support for President Muhammadu Buhari’s anti corruption stance, just as they hailed the Department of State Security Services for the recent search of the state Government House.

The group in a statement signed by former minister of women affairs, Obong Rita Akpan-Ibesikpo, said there was need for all Nigerians to support the president in his bid to fight corruption and terrorism.

They condemned what they called an attack on the DSS by some “cheerleaders and paid groups who hide under the cover of Akwa Ibom leaders forum and other proxy groups to ferment trouble against the legally constituted security agency like the Department of State Security Services”. The group described the attack as unecessary and embarrassing.

“We were surprised by the rather inconsistent, indecent and amateurish manner with which the governor, Mr. Udom Emmanuel handled the whole matter. Though, Udom has asked people to remain calm, he has been surreptitiously orchestrating and funding all manner of press conferences and advertorials in national and local newspapers aimed at blackmailing, embarrassing and ridiculing both the DSS and the federal government under President Buhari,” the group said.

It would be recalled that on Thursday, 3rd September 2015, a team of the DSS investigators allegedly carried out a search on the presidential wing of Akwa Ibom State Government House.

The Senior citizens wondered why the governor was “whipping up sentiments and emotions to curry political support from the general masses in something that is clearly a security issue”.

“We are very confident that the DSS must have depended on reliable intelligence before they visited Akwa Ibom State to conduct the search. Contrary to the wrong impression deliberately created by the PDP propaganda machinery and Udom Emmanuel himself, the fact of the matter is that the DSS officials only visited the presidential Lodge in Uyo, one of the several guest Houses owned by the Akwa Ibom State Government. We should state that at no time did the DSS officials visit the official residence of the governor, his office or Mr. Udom’s private residence because as at the time of the visit, the Presidential Lodge of the government House was occupied by Mr. Godswill Obot Akpabio, the former governor”, the group said.

It added: “We believe that the DSS is yet to make a statement on their visitation because the investigation is still ongoing. Until the investigation is concluded, it is therefore very premature, irresponsible and smack of guilt for Udom and his cheerleaders to condemn and vilify the Federal Authority.” They therefore warned Udom Emmanuel and other PDP members to desist forthwith from distracting security agencies from carrying out their constitution duties.