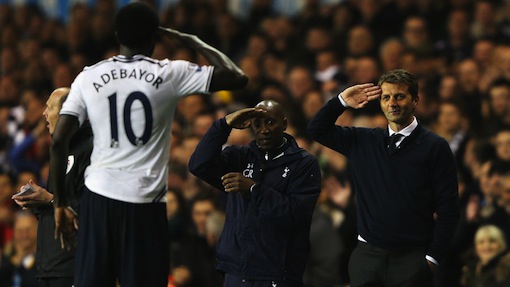 Aston Villa manager Tim Sherwood would jump at the chance to sign Emmanuel Adebayor if he showed the right attitude and desire but fears the Togo forward may now be frozen out of football until January after leaving Tottenham Hotspur.

Spurs said on Sunday that Adebayor had been released from his contract by mutual agreement. The 31-year-old has not played for Spurs this season and was left out of both their Premier League and Europa League squads.

Adebayor had reportedly rejected moves to Villa and West Ham during the recent transfer window but was told late last week by Spurs’ boss Mauricio Pochettino he had no future at the club.

The player has also fallen out of favour with Togo coach Tom Saintfiet, who likened him to a bad date and said recently that Adebayor had failed to respond to a call-up for an African Nations Cup qualifier.

However, Sherwood enjoyed a fruitful relationship with Adebayor during his time in charge of the North London side and said he would be keen to bring him to Villa if the player came with the right attitude.

“I would not hesitate if he had the desire to want to come and play football,” Sherwood told reporters when asked if he would try to sign Adebayor in the January transfer window.

“He’s too good a talent — I’ve seen that first hand — to not play any football but unfortunately I don’t think there’s any window open for him now.”