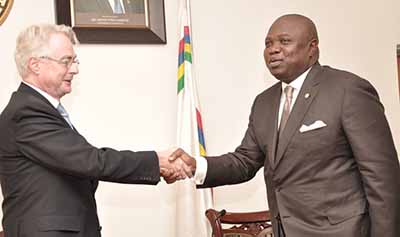 Lagos State Governor, Mr. Akinwunmi Ambode (right) in warm handshake with the Ambassador of Republic of Germany to Nigeria, Mr. Michael Zenner (left) during his courtesy visit to the Governor, at the Lagos House, Ikeja, on Monday, September 14, 2015.

The investment drive of the Lagos State Government received a major boost on Monday when the representative of a German company, Knauf Group International, Mrs Isabel Knauf expressed her company’s readiness to commence work on a N14 billion manufacturing firm in the state.

This came to fore when the German Ambassador, His Excellency Michael Zenner, led a group of German diplomats and investors on a courtesy visit to Governor Akinwunmi Ambode at the Lagos House, Alausa, Ikeja, Lagos, southwest Nigeria.

Knauf solicited the support of the Governor towards locating a $70 million (N14 billion) building/construction tools manufacturing company in Lagos.

She said the preference for Lagos was informed by its proximity to ports, availability of gas pipeline and a ready market.

“We are looking to invest and build a factory here. We are looking for your support. We have been to Lekki Sea Port and want to proceed on investing straight off. I wish to express our interest in investing about 70 million US dollars in construction of tools factory in Lagos for the first stage,” Knauf said.

Speaking also, the German Ambassador, Zenner, while canvassing for an increased presence of German businesses in Lagos, also sought for improved bilateral trade relations with the State Government.

“We are here to introduce and express our interest in business and economic cooperation, especially on food processing and building materials. A lot of allied companies in Germany also wish to join hands in the investment drive of the Governor,” the ambassador said.

In his remarks, Ambode who expressed his administration’s readiness to receive German investors, described Lagos as the economic hub of Nigeria and 5th largest economy in Africa, thereby making it investors’ first choice of destination in Nigeria.

“As the economic hub of the country, we pride ourselves as the largest of the nation’s economy with the GDP of $131 billion. For any German company that wants to do business in Nigeria, Lagos is your best bet. We are committed to the rule of law and we assure you of a safer and secured environment,” he said.

The Governor, who described the visit by the German envoy as the first by an ambassador to actually visit and commit to commence immediate foreign direct investment, lauded their confidence in the Lagos economy.

He assured the delegation of his administration’s commitment to do everything possible to ensure smooth take off of the project and sought to activate a state sister relationship with the city of Hamburg to further boost cooperation.

“I also want to let you know that you are the first ambassador to come out openly that you want to come and start business immediately. With your coming, investors are beginning to have confidence in our quest to build an investor-friendly environment. I want to say openly that we are committed to give everything required by this group to start work immediately,” Ambode said.