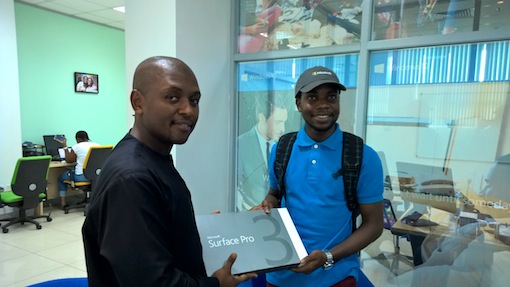 “Chidozie Ononiwu, are you going to let this chance pass you by?” A voice in my head continued to ask me. Yet I knew I was not going to lie, even if it meant forgoing something that meant so much to me.

Here was the situation: earlier in the year, Microsoft invited …Windows 10 Insiders (about five million people) to enter and participate in the Insiders to Campus Contest. The global tech giant whose mission is to empower every individual and organization on the planet to achieve more, offered to sponsor ten (10) Insiders to a two-day event to experience how it co-developed Windows with Insiders.

I was so happy to be one of the 10 people shortlisted. This meant that my entry scaled through several processes to emerge as one of the 10 out of 5 million contestants. My excitement was however cut short when I discovered a clause in the terms and conditions which stated that winners/participants must not have relative working with the company. Unfortunately, I had a relative working with Microsoft, and this meant foregoing the winning.

As an engineer, one of my dreams was to visit the headquarters of Microsoft in Redmond, Washington. And here was the chance, even with so many benefits; an opportunity to check out prototypes the public is yet to see, a chance to meet with Senior Microsoft Windows leaders, and several other exciting experiences.

Despite this matchless opportunity of going to Redmond fully funded by Microsoft, I chose to come clean. With a sad heart I wrote to Microsoft renouncing my qualification.

Today, I am happy I did the right thing. Microsoft appreciated my show of integrity and offered me gifts that amounted to over N700, 000. Some of the items given to me included; a surface pro 3, a type cover keyboard to go with it, a Lumia 1520 smartphone, two windows branded T-Shirts autographed by Joe Belfiore Corporate Vice President, Operating System groups, and many more. I even got a congratulatory video clip from Gabe Aul Engineering Corporate Vice President of the Windows Insider Program.

There’s always a good turn to being honest, and I’m glad that Microsoft recognizes that too.