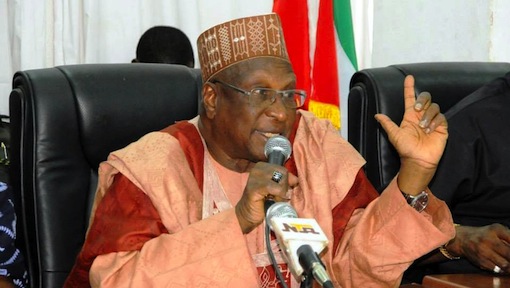 Former National Chairman of the Peoples Democratic Party (PDP), Ambassador Bamanga Tukur, has retired from the party and from partisan politics.

Tukur announced the decision on Thursday at the BMT African Garden, Abuja, in his address at a lecture entitled : “Enhancing Capacity Development For a Sustainable Regional Integration In Africa: Making The Dream a Reality” as part of activities marking his 80th birthday.

In the address entitled: “The Historical Background And Realities of My Earthly Sojourn, So Far”, Tukur said, “I deem it fit to use this opportunity of my 80th birthday celebration to announce my retirement from partisan politics”.

“It is time to say goodbye to formal politics. I have used several political platforms to serve my country. It is time to rest,” he said.

The former PDP National Chairman, said he was leaving partisan politics for the younger generation, and that he wanted to be a statesman and an Adviser.

“At the age of 80, I feel I can serve our dear nation more in the capacity of a statesman and father figure,” he said.

He, however, said his doors were open to all politicians, business men, business women, “and all Nigerians who may seek my advice or opinion on any issue affecting our country or beyond”.

Amb. Tukur enjoined politicians to “play the game according to the rules” and to put the interest of the nation at heart.

In his lecture, Dr Toga McIntosh, Vice President, ECOWAS Commission, said over the last two decades or so, the socio-economic gap between the developed region and Africa had “progressively widened”.

McIntosh identified weaknesses in effective planning, developing and utilising requisite African capacities, and “our uncoordinated approach to push from within, in a concerted way” among the factors responsible for the situation.