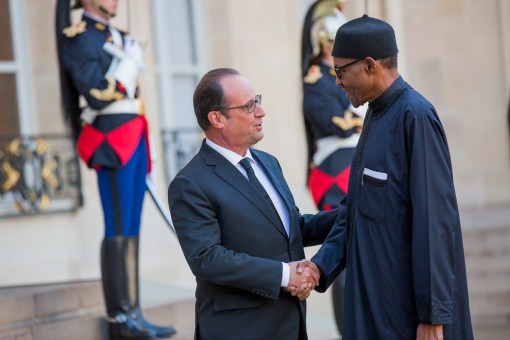 French President François Hollande has pledged that his administration will assist the Multinational Joint Task Force (MJTF) with intelligence gathering and equipment to check the activities of insurgents in Nigeria and beyond.

Hollande announced this on Monday at the Elysee Palace in Paris after a closed door bilateral meeting with President Muhammadu Buhari, who is on a three-day official visit to France.

The French President, who was addressing a joint news conference, said that his government was concerned about the increasing spate of insecurity in Nigeria and the entire West Africa sub-region.

According to him, his administration is ready to render support and assistance to Nigeria to enable the country to tackle insurgency and all forms of extremism in the country.

He said himself and President Buhari discussed new strategies of partnership that would enable Nigeria and its neighboring countries of Cameroun, Chad, Niger and Benin Republic, through the joint action of the MJTF, to fight the insurgency and restore peace.

President Hollande explained that as an intervention approach to assist in the fight against terrorism, France last year, hosted a Regional Summit on Security in Paris, which brought together the neighboring countries to chart the way forward.

“We provide all of the support to the countries in the region which are affected by this cult and in Nigeria, we want to provide support and solidarity,” he added.

He thanked President Buhari for his recent actions such as the movement of the military command centre to Maiduguri, which he said, had helped tremendously in weakening the insurgents.

According to Hollande, France has concluded arrangements to invest a total of 130million euro in the development of infrastructure in Nigeria for rebuilding of roads, provision of electricity and water supply.

He noted that in spite of the fall in the price of crude oil in the international market, which had affected Nigerian expected revenue, the country’s economy still remained strong.

“The Nigerian economy remains strong so, France wants to be doing business in the country,” he said

Hollande said that France intended to increase the visibility of its investors more in Nigeria.

In his remarks, President Buhari thanked the French president for his administration’s interest to assist Nigeria.

He expressed the readiness of his administration to partner with France for the overall development of both countries.

President Buhari noted that with commitment from France, Nigeria’s next shopping list regarding support would move to other members of the G7.

“We have to depend on France and the other G7 countries for support to fight piracy,” he said.

“Another problem is the problem in the Gulf of Guinea, from Senegal to Angola; that area is endowed with resources like petroleum and other minerals but surrounded by piracy and theft.

“We are going to depend on France and G7 countries to flush these criminals out of the region.”

On Nigeria’s problems, President Buhari lamented that more than 67 per cent of youths, most of them under their youthful age, were unemployed.

“We are finding best way in agriculture and mining to address this challenge before sophisticated infrastructure and security are provided.

“We want to make sure we feed ourselves and provide security before other things are also tackled.