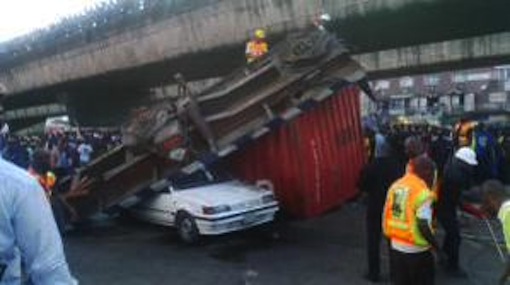 The owner of the truck whose container fell and killed three people at Ojuelegba overhead bridge, in Lagos, on 2 September, 2015, Mr. Kilani Ojo Adesanya, has been arraigned before an Ebute Metta Chief Magistrates’ Court in Lagos State Southwest Nigeria.

He was arraigned Tuesday, on a two-count criminal charge of giving the truck to a driver without driving documents.

The 50-year-old man was arraigned before the court by the men of Criminal Investigation and Intelligence Department of Lagos State Police Command, Panti,Yaba, Lagos.

The accused truck owner was alleged to have permitted the driver of the truck Wasiu Adeleke to drive his truck with registration number EPE 46 XK without a valid driver’s license issued to him by the appropriate authorities.

He was also alleged to have given the truck to the driver to drive on the highway without MOT test certificate, road worthiness certificate, and vehicle license issued in respect of the truck by the appropriate authorities.

According to the prosecutor Barrister Godwin O. Osuyi, the offences allegedly committed by Adesanya are contrary to and punishable under sections 36(1 &2) of Road Traffic Laws of Lagos State, 2012.

His lawyer, Mr. W. O. Toriola urged the court to grant him bail on self recognition.

He hinged the bail application on the premise that the accused is a senior citizen of the country without any previous criminal record.

The prosecutor did not oppose the bail application.

However, the presiding Chief Magistrate, Mrs. A. Folashade Botoku, queried the prosecutor, Barrister Osuyi, for not informing the court of the sister case, in which the driver of the truck was charged before the court, and for not asking for the consolidation of the two cases.

The driver of the truck, Wasiu Adeleke, was arraigned before the court last Friday, on 11-count charge of multiple manslaughter as the accident caused the death of three persons namely: Abubakar Sule, 52; Umaru Sulaiman, 46; and Kamilu Umaru, 28.

The driver pleaded not guilty to all the count charges.

The Chief Magistrate adjourned the matter till 23 September, 2015 for ruling on the bail application.