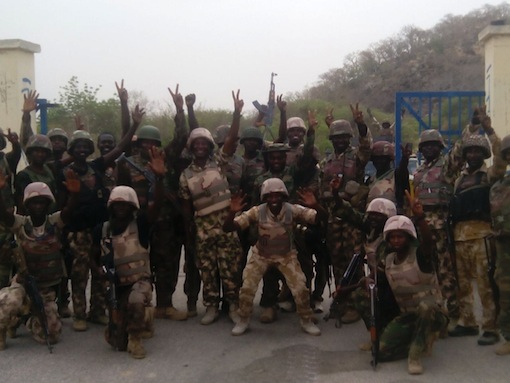 The Nigerian Army said on Tuesday that scores of women and children held captive by Boko Haram insurgents have been rescued by troops along Banki, Kumashe and Bama axis in Borno.

The acting Director of Army Public Relations, Col. Sani Usman confirmed the development in a statement issued in Abuja.

He said the advancing troops cleared four camps along the axis, while several others were cleared in Bolungu 1 and 2, Bula Doye and Cheehi Dare areas also in Borno.

“They were able to clear the terrorists’ camps at Bolungu 1 and 2, Bula Doye and Cheehi Dare and secured a very important bridge linking the towns of Miyanti and Banki in Borno State.

It said more enclaves of the insurgents would be cleared as troops involved in the operations advanced towards more areas previously occupied by the insurgents.

The statement said the offensive operations by ground troops and aerial bombardments by the Nigerian Air Force would continue in the region until the insurgency was ended.

The News Agency of Nigeria (NAN) recalls that the military had intensified offensive against the insurgents with the aim of ending their reign of terror in the North East.