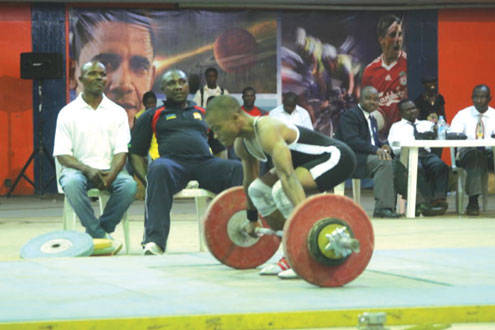 •A weight lifter during a weightlifting tourney.

Nigeria’s Powerlifting head coach Feyisetan Are, has urged the athletes to remain focused as the competition continues Wednesday, saying that “this is the beginning of the harvest of gold for the country because we hope to win more.”

He spoke after Team Nigeria continued her dominance in powerlifting by setting a new world and African record at the ongoing Brazzaville 2015.

Nigerian Yakubu Adesokan lifting 182.5 to win gold at the games in 45 kg and subsequently setting new world record in the process.
Apart from setting new African record, he also crashed his own record of 181.The former world record was held by a Powerlifter from Vietnam.

At the event held Tuesday at Stade Ornano, Lateefat Tijani who is participating for the first time at the international stage set a new African record in 45kg category for female, lifting 98 kg to also win gold in her class.

Adesokan and Tijani expressed happiness over the success and gave thanks to the Almighty Allah for making it possible, adding that their effort was as a result of hard work and determination.

The secretary of the Weightlifting Federation of Nigeria, Dapo Akinyele commended the athletes for making the country proud.