Heads to roll in U-23 Eagles, vows Siasia 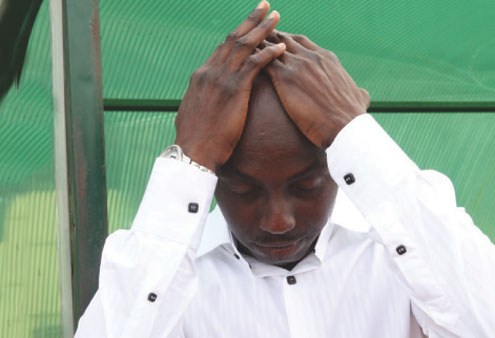 Following Nigeria’s ouster from the football event of the ongoing All Africa Games in Congo-Brazzaville, Head Coach of the U-23 Eagles, Samson Shania, has vowed to wield the big stick and send most of the players out of the team.

The Dream Team lost 1-3 to Burkina Faso in a match Nigeria were expected to win on Tuesday.

After the disappointing result, Siasia vowed that there is no way he can continue working with the set of players he took to the All Africa Games, especially as the country gets set for the Africa U-23 Nations Cup in Senegal, a qualifying tournament for the 2016 Olympic Games in Rio, Brazil.

Siasia stated that he is happy that the worst has happened at the All-Africa Games and he has learnt his mistakes.

“We will make corrections after the All Africa Games. I plan to travel to talk to some players I have already penciled down, then hopefully, the team should be assembling in the first week of October to prepare for the Africa U-23 Cup of Nations. Certainly, some of the players I brought to Congo Brazzaville will have to give way.

“It’s going to be very difficult to go out there and say we want to compete if we don’t take care of these problems. We have a long way to go, we just have to go back to the drawing board and try to see what went wrong,” Siasia lamented.

Siasia then apologized to Nigerians for letting them down by not qualifying for the All-Africa Games men’s football final and bringing home the gold medal.

“I am not a man of excuses. I take all the blame for this collapse and will certainly make amends before the Africa U-23 Cup of Nations.”

On what really went wrong in the semi final clash, Siasia said: “I never imagined losing to Burkina Faso, but then my midfielders played so well, my defenders and attackers let me down, can you imagine my attackers not being able to convert about eight chances that came their way?

“To make matters worse, the defenders were asleep on a day they should have been up and doing. Who told the central defenders to keep offside trap the way they did? I am totally disappointed; we can’t play like this in Senegal and expect to qualify for the 2016 Olympics. No way!

“We were so bad that anytime the ball beat the defenders, even my goalkeeper could not stop any of the shots fired at him. Football is a team work where errors are bound to occur, but it’s the ability of fellow team mates to cover for one another that makes a team great. That I didn’t see today.”