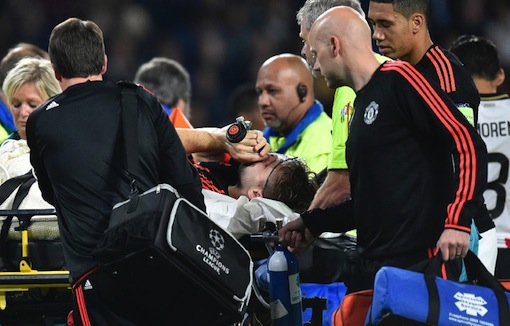 Manchester's defender Luke Shaw receives treatment after an injury during the UEFA Champions League Group B football match between PSV Eindhoven and Manchester United at the Philips stadium in Eindhoven, Belgium on September 15, 2015 (AFP Photo/John Thys)

(AFP) – Manchester United full-back Luke Shaw suffered a double fracture of the leg during his team’s 2-1 defeat to PSV Eindhoven in the Champions League on Tuesday.

The 20-year-old was taken to hospital after suffering the horror injury a quarter of an hour into the clash at the Philips Stadion.

“Our thoughts go out to , who has suffered a double fracture of the leg. He will have an operation on his return to Manchester,” said United on their Twitter feed.

The game was held up for almost 10 minutes as the England international received treatment on the pitch from a posse of medical staff before being stretchered off with an oxygen mask over his face.

Although visibly in pain, Shaw took to Twitter around half an hour later to vow that he would make a full recovery.

“Thank you everyone for your messages, words can’t describe how gutted I am, my road to recovery starts now, I will come back stronger,” he tweeted.

Shaw was surging into the box when he was hit with a crunching and dangerous two-footed off-the-ground tackle by Hector Moreno.

Incredibly, no foul was given and Moreno was not even booked — he later equalised Memphis Depay’s opener against his former club.

Luciano Narsingh scored the winner in the second half, against the run of play.

Shaw was replaced by Marcos Rojo.