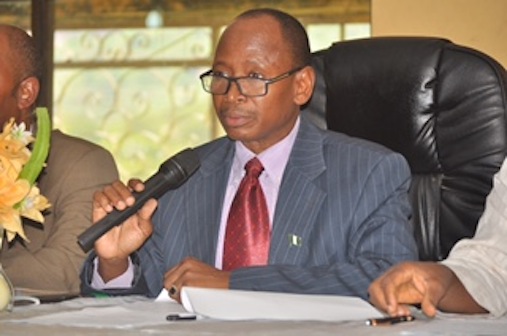 Accountant-General of the Federation, Ahmed Idris

Alhaji Idris made this known when he paid a courtesy visit to Babachir Lawal, the Secretary to the Government of the Federation, SGF, on Wednesday 14th October 2015 in his offce to seek further collaboration in executing financial reforms.

He said that the IPSAS Accrual -based accounting would further curb corruption, revamp the accounting and reporting of governments’ financial transactions and deepen transparency in the management of public funds. IPSAS are a set of accounting standards issued by the IPSAS Board for use by public sector entities around the world in the preparation of financial statements.

These standards are based on International Financial Reporting Standards (IFRS). The implementation of IPSAS is geared to place Nigeria in a global stage as far as presentation and preparation of accounts is concerned.

Alhaji Idris said that the first stage of IPSAS, which is the cash basis of accounting, was already being implemented with success. He appealed to the SGF for support to make the IPSAS accrual-based accounting standards policy a success come January 2016.

In his words, “as the Chief Accounting Officer in charge of the overall management of receipts of the Federal Government, I have continued to improve on existing economic reforms such as GIFMIS, IPPIS and TSA.”

Speaking further he said, “I have vigorously pursued the implementation of the TSA as part of Federal Government policy to have a firm grip on the financial position and efficient allocation and utilisation of resources.

The AGF also said he has made it a point of duty to satisfy public awareness by publishishing monthly allocation of funds to the three tiers of government from the Federation Accounts Allocation in the national dailies while he also working on a deliberate policy to make public the Annual National accounts of the country.

He said doing this would be in line with the current administration’s philosophy of accountability and transparency.

On the implementation of the Treasury Single Account, Alhaji Idris said that a technical support team had been commissioned to carry out diagnostic review of its implementation and performance.

He asserted ,”We believe that these are the best ways to block leakages in the public sector and ensure that funds are adequately accounted for so that government can have enough to meet its obligations.”

The SGF also said, “ government is also concerned about the people in charge of all this, because a system is only as good as its operators. That is why we are watching the accountants in all the MDAs closely,’’ he said.

The SGF equally urged the AGF to improve on the technology used in the day to day activities of the Office of the Accountant-General of the Federation to enable officers be more efficient. Engr Lawal then pledged his support for the OAGF to drive the financial reforms needed to move the country forward.