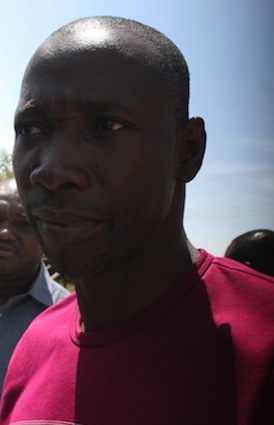 A suspected fraudster and member of a syndicate, Edward Abiodun, was on Wednesday, October 14, 2015 arraigned by the Economic and Financial Crimes Commission, EFCC, before Justice Beatrice Iliya of Gombe State High Court, Gombe, Gombe on a two-count charge bordering on conspiracy, personation and obtaining money by false pretence.

The accused person and his accomplices, Murtala Bello and Esther Momoh (who are now at large), had allegedly claimed to be staff members of the EFCC, Abuja office, in order to dupe one Umar Bello.

The complainant alleged that Bello had, on March 13, 2015, phoned him, assuring him that the syndicate could ‘kill’ the purported petition written against him, if he could pay the sum of N10 million (ten million naira).

Consequently, Bello was said to have sent the phone number of Momoh who claimed to be a Principal Detective Superintendent, PDS, with EFCC to the victim for further discussion on how the money could be paid to them.

The complainant also alleged that the suspects offered to collect N300, 000 (Three Hundred Thousand Naira) from him when he could not raise the initial N10million (ten million naira).

He further said that one ‘Laolu Adegbite’, who claimed to be the officer handling his purported case, sent an SMS to him on March 19, 2015, summoning him to appear before the Commission on March 23, 2015.

Worried by the persistent threat from the syndicate over the balance of N250, 000(Two Hundred and Fifty Thousand Naira), the victim petitioned the EFCC, which swung into action and eventually arrested the accused person.

Count two of the charge reads: “That you, Edward Abiodun and Murtala Bello, Esther Momoh, (now at large) sometimes in March, 2015 at Gombe, Gombe State which is within jurisdiction of this Honorable Court with the intent to defraud did fraudulently obtained the sum of Fifty Thousand Naira (N50,000.00) only from one Umar Bello through your Diamond bank Account number 0044213102 which sum you collected under a false pretence. The said sum is to be used to facilitate his investigation at Economic and Financial Crimes Commission (EFCC), Abuja and you never did, thereby you committed an offence contrary to section 1(1) and (b) and punishable under section 1(3) of the Advance Fee Fraud and Other Related Offences Act, 2006.”

The accused person pleaded not guilty when the charge was read to him.

In view of his plea, the prosecution counsel, Zarami Muhammad, asked for a trial date and prayed the court to remand the accused person in prison custody.

The defense counsel, Micheal Ofoma , did not oppose the prayer for a trial date by the prosecution counsel.

After listening to both counsel, Justice Iliya adjourned the matter to October 26, 2015 for hearing of bail application and ordered that the accused person be remanded in prison custody.