NBC boosts public education with ‘Back to School’ initiative 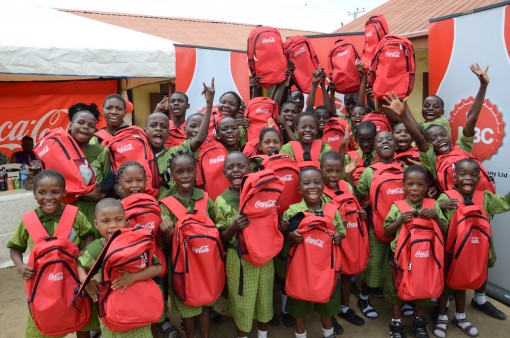 In demonstration of its support for educational development in Nigeria with emphasis on supporting pupils’ enrolment and retention in public primary schools, Nigerian Bottling Company (NBC) Limited has donated school kits containing educational materials to 5,000 pupils under its Back To School Initiative across different public primary schools in Lagos, Kano, Abuja, Onitsha, Okigwe and Asejire.

During the presentation of the educational materials to the schools, the Managing Director, NBC, Ben Langat, who was represented by the Country Chief Security Officer, Van Wilberding, said “the move is aimed at supporting parents and guardians in relieving financial burden as their children and wards return to school for a fresh academic session and further encouraging enrolment in public primary schools as well as a reduction in out of school rate in primary education across the country.”

Sharing her delight at the event, Mrs. Olabisi Ariyo, Permanent Secretary, Ministry of Education, Lagos State, represented by Mrs. Omolara Akin-Adekibigbe, Director, Administration and Human Resources, commended the effort of NBC in contributing to the intellectual capacity development of the Nigerian child.

She said: “The initiative is in line with efforts at delivering qualitative education to our children, the future of our country and a manifestation of government’s call for private sector involvement in developing key sectors of the economy, particularly Education.”

She added that the gesture will go a long way in supporting and motivating the pupils towards academic excellence.

In the same vein, Chief Nzemeka Olisa, Executive Chairman, Anambra State Universal Basic Education Board, during the presentation of the educational materials to pupils from United Primary School, Nkpor, Onitsha, said: “I applaud NBC for the initiative, it is a clear demonstration by the company that educational development cannot be left to the government alone, because of dwindling resources. Other companies and well-meaning individuals are hereby encouraged to emulate the NBC example.”

Chief Olisa also urged the children to make the best use of the items received from the company, inspiring them to strive for academic excellence at all times.

NBC Back To School Initiative, which was kick-started in 2011 has benefited over 13,000 pupils in public primary schools.

The Initiative instills a sense of pride and confidence in the pupils as they return to school for another academic session.

Other strategic educational investment by the company in primary education include the provision and upgrade of infrastructure in public schools, capacity building for teachers and school support initiatives toward the learning and development of the Nigerian child.