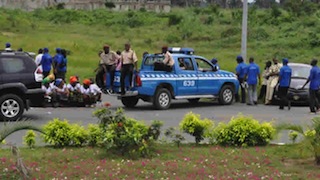 FRSC at the scene of an accident

The Federal Road Safety Commission (FRSC) said on Saturday that the Southwest geo-political zone of the country has recorded lowest road accidents in the year.
The FRSC Commander in Osun State, Mr Muhammed Husaini, said this in Osogbo during the flag off of the ’ember month’ campaign.
Husaini said that Osun has the lowest road accident occurrence compared to other states in the country.
However, he called on motorists in the state to continue to cooperate with the commission in its efforts to ensure road safety.
He said that the command has made available both human and material resources to meet the challenges of the ember months.
“The Ember and Yuletide seasons happened to be the most challenging periods for us, as many Nigerians especially the road users, take advantage of the these periods to travel for various activities.
“It has always been our plea to the road users to desist from road vices such as speed violation, overloading, drunk driving.
“Use of cell phones while driving, non-use of seat belts and use of worn-out tyres, among others.
“To avoid being prosecuted, there must be strict compliance with all our rules and regulation,’’ the sector commander said.
In his remarks, Gov. Rauf Aregbesola reiterated his administration’s commitment to ensure total protection of lives and property during the Ember months.
Aregbesola, who was represented by Secretary to the State Government, Alhaji Moshood Adeoti, he described the Ember months as the most significant period of the year.
He also urged the motorists in the state to ensure strict compliance with traffic rules and regulations.
The governor warned that offenders of traffic rules would be prosecuted.