With US backing, Nigeria says fight against Boko Haram on course 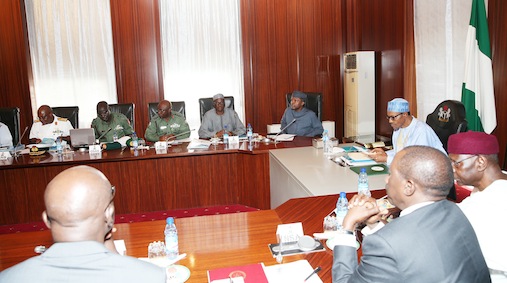 The Permanent Secretary, Ministry of Defence, Malam Aliyu Ismail, said on Monday that the Nigerian Armed Forces were working hard to ensure that the mandate of crushing Boko Haram before the end of the year was realised.

He said this in an interview with State House Press Corps after the Service Chiefs briefed President Muhammadu Buhari on the military operations in the North-East, and South-South regions.

“The mandate is that we should clear the Boko Haram from the occupied territories and ensure that we reclaim all the lost grounds. And that is exactly what we are doing,” he said.

He said that the visit was to update the President on the progress made so far after the military reviewed its operations in the last 60 days.

He said the US and the West had been with the force in capacity building and other issues which the ministry would reveal in due course.

He said that President Buhari had directed the force to continue with its effort to achieve complete success.

Meanwhile, the US has expressed happiness with the effort of Nigeria in counter terrorism.

The US Special Envoy and Coordinator for Counterterrorism Communication, Mr Rashad Hussein, said this while briefing State House Press Corps after a courtesy visit to Vice President Yemi Osinbajo on Monday.

“We are very pleased with the leadership the President and the Vice President are showing.

“We are having so many challenges but we are hopeful that under the leadership we will be able to establish partnerships and be able to make a strong difference going forward.

He said that groups such as Boko Haram and ISIL were doing great damage to the causes which they claimed to defend.

He said that the good people of the world and Muslim community all over the world were offering messages of peace and hope.

“We want to talk and work together to make sure that the message is clear to everyone.

He said that the insurgency fight against Boko Haram was one that the Nigerian government had faced squarely and said those behind the insurgency were deceiving young people.

“Boko Haram and other groups are trying to steal young people and deceive them and to offer to them a future of destruction rather than a future of hope and we are ready to offer technical support to Nigeria.”