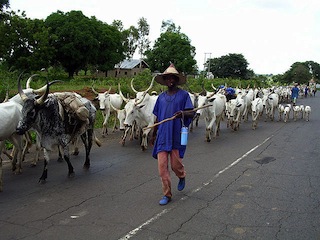 The Police on Wednesday arraigned a 28-year-old man, Adamu Haruna, before a Senior Magistrates’ Court in Katsina for allegedly leading a gang of cattle rustlers terrorising communities in Katsina State.

The accused, who resides at Danke village of Safana Local Government Area of Katsina State, was arraigned on a one-count charge of leading a gang of thieves that specialised in cattle rustling.

The Police First Information Report (FIR), stated that the accused was arrested by the state’s Anti-Cattle Rustling Military Team on Sept. 11 at about 9.30p.m in Marmara village.

“The soldiers, under the command of Maj. Hamza Abdullahi, arrested the suspect, following a tip-off that he was the leader of the cattle rustlers in the area.

“The soldiers were informed that the suspect had been organising the theft of cows and terrorising the villagers, who owned the cows.

“When accosted by the soldiers in his hide-out at Marmara village, the accused failed to give any satisfactory explanation about his business or involvement in cattle rustling,” it added.

The offence contravened Section 306 of the Penal Code Law.

The prosecutor, Insp. Hashimu Musa, told the court that the police were still investigating the matter.

Magistrate Nafisah Bagiwa, said that the court would not take the plea of the accused, as it had no jurisdiction to do so.

Bagiwa explained that the accused was arraigned before the court for the purpose of cognisance only and ordered the case file to be forwarded to the state Ministry of Justice for advice.

She directed the police to continue with the investigation and adjourned the case till Oct. 27 for continuation.